Vinay bowls RCB to a shock win over Mumbai Indians

Hosts Royal Challengers Bangalore clinched a thrilling 2-run win to upset Mumbai Indians at the M Chinnaswamy Stadium. R Vinay Kumar, bowling the final over of the match, had only 10 runs to defend against the likes of the well set Dinesh Karthik...

Hosts Royal Challengers Bangalore clinched a thrilling 2-run win to upset Mumbai Indians at the M Chinnaswamy Stadium. R Vinay Kumar, bowling the final over of the match, had only 10 runs to defend against the likes of the well set Dinesh Karthik, Rayudu and then the ballistic Kieron Pollard. While Vinay got Karthik and Rayudu out in consecutive deliveries, he was clobbered for a first ball boundary by Pollard. The final equation was four needed to win from one ball with Pollard on strike and a cool Vinay got it right up in the blockhole to deny a big lofted shot.

The match was Mumbai Indians after keeping RCB down to 156. The veteran opening pair of Sachin Tendulkar and Ricky Ponting took their own sweet time but in the end put up a steady start of 52 for the first wicket in 7.3 overs. Tendulkar scored 23 from 19 balls while Ponting settled for a 33-ball 28 before departing in succession and leaving the middle order under heavy pressure. 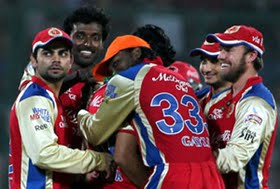 RCB got hold of the game until one poor over from Dan Christian turned the match on its head and conceded 23 runs. Dinesh Karthik just got going in that over taking the Aussie medium pacer for three sixes and a boundary. The match tilted in Mumbai Indians’ favour after this before Vinay Kumar spoilt their party with a superb last over. Dinesh Karthik scored a sizzling 60 from 37 balls with 3 fours and 4 sixes before he was bounced out by Vinay in the final over. Mumbai Indians paid a heavy price for their tactical blunder of keeping Pollard in the dug out for a long time! When Pollard did come out to bat, he could face only two balls in which he scored 5 out of the required 8 runs for the win.

Without any doubt, Chris Gayle for his special knock got the Man of the Match award.

Gayle power lifts RCB to 156: An injured Chris Gayle single handedly powered hosts RCB to a competitive total of 156 for 5 on a wicket that is conducive for fast bowling. Gayle took his time before he got going while the rest of the top order perished back in the pavilion leaving RCB in trouble at 80 for 5 by the 13th over. Gayle batted right through the 20 overs to score 92* from 58 balls with 11 fours and 5 sixes.

For Mumbai Indians, Mitchell Johnson and Munaf Patel bowled beautifully at the start and debutant seamer Jasprit Bumrah spoilt their efforts leaking three boundaries but came back strongly to take three wickets. With his skiddy big inswingers, Bumrah got the big wicket of the RCB Captain Virat Kohli who was looking good until then with a 14-ball 24.

Bumrah who has got an unusual action with both arms high in the air like a leggie claimed two more wickets to leave RCB on the backfoot completely. But with a talented batsman like Arun Karthik coming in at no.7, RCB had enough depth to support Gayle right through the end. Karthik scored a crucial 19* in as many balls while helping Gayle in an unbroken 76-run stand.

Gayle during his innings injured his hamstring when Harbhajan Singh dived to his right and crashed onto the former at the non-striker while attempting a return catch. The West Indian power hitter could have done some serious damage to his hamstring but that did not stop him from tearing the Mumbai Indians bowlers in the final overs.

Toss and Teams: Ricky Ponting, the new Mumbai Indians Captain has won the toss and asked hosts RCB to bat first at the M Chinnaswamy Stadium in Bengaluru. The four overseas players for Mumbai Indians are Ponting, Oram, Pollard and Johnson. For RCB, the four overseas stars are going to be Gayle, Dilshan, Christian and Muralitharan.