Sehwag or Yurvaj… whom will India drop?

It’s pretty much confirmed now that India will go into their opening Super Eights clash against Australia on Friday with five bowlers. At the post-match conference, Indian skipper M S Dhoni went to the extent of admitting that either Yuvraj Singh or Virender Sehwag will have to pave the way for the inclusion of a fifth bowler;

It’s pretty much confirmed now that India will go into their opening Super Eights clash against Australia on Friday with five bowlers. At the post-match conference, Indian skipper M S Dhoni went to the extent of admitting that either Yuvraj Singh or Virender Sehwag will have to pave the way for the inclusion of a fifth bowler; it has been a move necessitated by Harbhajan Singh’s wonderful comeback against England. Like India, Australia have also progressed through to the Super Eights by winning both their matches, and that too in a much more convincing manner. Among the two teams, they are the ones sure of their playing XI, which gives them a slight advantage over the Indians. 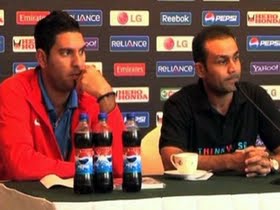 Returning to the Sehwag-Yuvraj question, dropping the left-hander might be a more sensible choice at this point of time. Although it would be a harsh call since Yuvraj hasn’t done much wrong yet with the bat, and has been rather handy with the ball. Still, it is clear that he hasn’t gained hundred percent fitness. On the other hand, even though Sehwag has been woefully short of runs, he should be given a go against Australia, for if he comes off, his knock would go a long way in helping India compete.

The return to form of Gautam Gambhir and Rohit Sharma would have made Dhoni’s decision of adopting the five-bowler policy easier. They have Virat Kohli, who has been due for a failure for a while now, but hasn’t had one. Australia would be hoping Friday is that day, while India would be praying that day just never comes. One wonders if India would also be pondering upon playing three spinners and including Piyush Chawla at the expense of either Laxmi Balaji or Zaheer Khan. Dhoni seems to have a liking for the leggie, so it shouldn’t be exceedingly surprising if something of that sort transpires.

Getting into their usual gamesmanship mode, Australia have spoken of undoing the Indian batsmen with ‘chin music’. Back in Australia, they certainly succeeded in the ploy, but whether the plan would be successful on Sri Lankan pitches is a point of intrigue. Remember, England overdid their short bowling stuff against India, and had to pay the price. Still, India should be wary of Mitchell Starc and Pat Cummins for they are capable bowlers, and could trouble the strong Indian batting line-up.

If one has to pick up a weakness of sorts in this Aussie line-up, it has to be the fact that their batting hasn’t actually been tested in the series. Against West Indies they played only half the overs, and were guided home brilliantly by Shane Watson. The all-rounder was the significant feature of Australia’s comprehensive victory against Ireland as well. As such, the rest of the batsmen haven’t had much to do. If the Indian spinners, Harbhajan in particular, can get their act right, they could create major problems for the Aussies.

In the end, it is all likely to come down to India’s spinners Vs Aussie pacers. Whoever performs better on the day might twist the result their side’s way.