India needs to be aggressive at Nagpur

We now wait with bated breath for the start of the fourth test at the Vidarbha Cricket Association Stadium in Nagpur. India will go into the game with at least two changes, possibly more, as both Zaheer Khan and Yuvraj Singh have been removed from the squad.

Freedom is just another word for nothing left to lose. (Kris Kristofferson)

We now wait with bated breath for the start of the fourth test at the Vidarbha Cricket Association Stadium in Nagpur. India will go into the game with at least two changes, possibly more, as both Zaheer Khan and Yuvraj Singh have been removed from the squad.

But whoever plays on Thursday, this should be a real interesting and important game. Currently leading the series 2-1, England will not be complacent. Rest assured that they will be resisting the urge to sit back and wait for a draw that would assure them their first series victory in India since 1984-85. Such a tactic will only play into India’s hands, who will undoubtedly be going at them full speed. As Graeme Swann said, “I’m sure we’ll approach the game thinking attack is our best form of defence.” 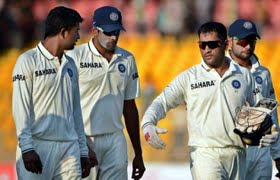 On the brink of being eliminated from the 1992 World Cup after doing poorly in the first few games, inspirational captain, Imran Khan, implored his team to fight like “cornered tigers.” Duly motivated, Pakistan went on to win their last five games and the World Cup title.

This should be India’s mindset as they approach this last test. The hosts have no choice but to strive their hardest for a win and so end the series tied 2-2. It will be a tall order, for they were totally dominated in every department of the game in Mumbai and Kolkata. They know they have nothing to lose and that could make them dangerous. “I’m sure India will come out fighting,” opined Swann, “because they have to win the game.”

Having nothing to lose allows a freedom that could facilitate the kind of performance that fearfulness stifles. It permits players to give full expression to their talents, offering little thought to failure, and pushing them to heights they probably never expected to reach. The cagey fighter, holding himself back and fighting well within himself is hardly ever going to dominate his opponent. More likely is that his unwillingness to express himself will embolden his opponent into relentless attack, a tactic that will lead to victory more often than not.

This is not to say that India should become careless. Admittedly, there is sometimes a fine line between all out attack and recklessness, and test match cricket is nothing if not a game of consistency and patience. To propose aggression is not to propose carelessness. Rather, it is to encourage India to play with more purpose and more focus than they have so far this series.

Take Virat Kohli, for example; he has needlessly and nonchalantly given up his wicket a few times this series to innocuous deliveries that should really have posed little threat to him. In the first innings of the second test he drove loosely at a wide delivery from Panesar and was caught at cover. In the second, he slapped a full toss from Swann into the hands of mid-off. These were unprovoked dismissals that signaled a lack of focus from a player who has been very productive over the last year or so. This last test is now his only opportunity to ensure he doesn’t end the series empty-handed.

It is a given that India never expected to be behind going into the last test. Whatever their performances abroad, Indian fans and players always believed that they would have the upper hand at home. It has (almost) always been so, and there was no reason to believe that this time it would be any different. This flogging at the hands of England has not only taken them by surprise, it has also humiliated them. No matter how this last test turns out India has a lot of work to do before they can return to the top of the test cricket pile. Nagpur, however, offers them a chance to salvage the series.