Bhuvneshwar Kumar proved how dangerous he can be in helpful conditions

The good part for India prior to their do-or-die clash against Sri Lanka at Port of Spain on Tuesday was that they knew exactly what they had to do to sneak into the finals ahead of hosts West Indies.

The good part for India prior to their do-or-die clash against Sri Lanka at Port of Spain on Tuesday was that they knew exactly what they had to do to sneak into the finals ahead of hosts West Indies. The tough part though was that it was by no means an easy task, and the constant rain interruptions only made it that much more difficult for India to survive. With India having to bat first, Sri Lanka had a distinct advantage since they had to chase their target in fewer number of overs with all ten wickets in hands. India still won, and one man made that distinctly possible.

All this while, Bhuvneshwar Kumar had developed a reputation of picking up early wickets, thus getting the team off to confident starts with the ball. On Tuesday though he went one step ahead and demonstrated that he can also be a match winner on his day. Agreed, the conditions were very much suited to his style of bowling on the day. Still, Kumar had to put the ball in the right areas to make it talk viciously, which is exactly what he did and impressed one and all. 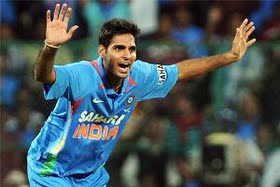 Often in the past, Indian seamers have gotten carried away looking at the pitch, and watering their mouth at the prospects of bowling on the surface. As a result, they ended up bowling utter crap and have been thrashed. This was a common phenomenon in the 90’s. But, Kumar definitely doesn’t belong to that breed of pace bowlers. He knows his limitations, and bowls exactly within them. And, on days when he gets bonus pitches like the one at Port of Spain, he ensures he capitalises to the hilt. All of Kumar’s victims were claimed courtesy excellent line and length bowling. Of course, Kumar Sangakkara got the shocker, but Kumar isn’t to blame for that.

While Kumar set up the game in India’s favour very early in Sri Lanka’s innings, the other bowlers ensured that their Asian counterparts do not stage a fight back. Mind you, it must be said though that the Indian bowling looks much more competent with Kumar around. That Ishant Sharma, Ravindra Jadeja and Ravichandran Ashwin got among the wickets had a lot to do with the fact that Kumar never allowed Lanka to get away at the start. Still India would have been pleased to see the trio of Sharma, Jadeja and Ashwin strike some crucial blows.

In the context of the game, Rohit Sharma made a significant contribution with the bat. During his stay at the crease, it often seemed like the opener was batting as if this was a Test match. But only when Lanka batted did one come to know how well Sharma had adapted to the difficult conditions. The pitch was doing all sorts of tricks, but unlike in previous games Sharma did not throw this wicket away to a soft stroke. Yes, the Indian innings did not last the full distance so we would never know if Sharma would have carried on or not. But, on the day and under the prevalent situation, his innings was precious.