Australia’s inexperience came to the fore at Adelaide

As mentioned prior to the beginning of the one-day series, Sri Lanka had a much better chance of doing well in the shorter format of the game even though they were blanked in the Tests. And their overwhelming victory at the Adelaide Oval justified this stance.

As mentioned prior to the beginning of the one-day series, Sri Lanka had a much better chance of doing well in the shorter format of the game even though they were blanked in the Tests. And their overwhelming victory at the Adelaide Oval justified this stance. Australia had it easy at Melbourne courtesy some very good individual efforts, but once Sri Lanka had them in trouble early on in the match on Sunday, Australia were going to be tested severely. Eventually, the experience in the Lankan bowling attack outdid the exuberance and talent of the raw Australian batsmen. 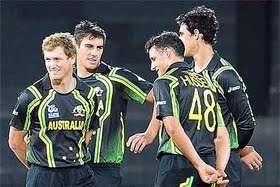 It was a complete team effort by the Sri Lankan bowlers, and what they did very well from start to end was not allow any significant partnership to build as a result of which their batsmen had to chase a rather paltry total. Nuwan Kulasekara and Angelo Mathews, who opened the bowling, kept things very tight and were aptly rewarded for the same. They combined to send back the Australian opening pair. The wicket of Phillip Hughes was extremely important considering he had scored a ton in the previous game, which was his debut.

Australian had taken the challenging decision to rest some of their key players. And the lack of experience in the batting came to the fore on Sunday, as none of the Aussie batsmen could hang around to start a fight back, something which Australia are traditionally good at. For a brief while David Hussey and George Bailey promised to repeat their heroics of the previous game, but this time they could not carry on after getting start. Following the early losses Steven Smith had an opportunity to prove his worth as a batsman, but like in the past he could not capitalise on the same.

Brad Haddin brought all his experience into play and rescued the home side to an extent, but the damage done was all but irreparable. While the Aussie batsmen could definitely have done a better job, it has to be said that some very good bowling from the Lankans made their job extremely difficult. While Kulasekara and Mathews delivered the early blows, Thisara Perera and Lasith Malinga also chipped in with crucial wickets, as a result of which Australia could never recover completely. The impressive performance with the ball would have given Sri Lanka plenty of confidence when they stepped on to the field.

The only way Australia could have made an impact in the game is if they picked up some early wickets. And although Upul Tharanga fell very soon, Lahiru Thirimanne played an extremely mature knock to lead Sri Lanka to their maiden win on tour. The century, which followed his 91 in the last Test, means the batsman has only enhanced his reputation. Thirimanne got good support from the experienced Tillakaratne Dishan as Lanka got home without trouble.

The win must give Sri Lanka confidence to do even better in the upcoming games. As for Australia, they wouldn’t be disappointed since they are playing a raw side. The experience the home players are gaining will definitely aid Australian cricket in the long run.