Nagpur Test: Enough of talking, now for some results please

Match Preview of India Vs England, 3rd Test at Nagpur

Irrespective of the result of the Nagpur Test, one thing is for sure, India are now as poor at home as they are abroad. Even if the series is drawn, which seems like a miraculous possibility at this stage, it would be a defeat for the home side in the sense that they were expected to roll over the Englishmen in conditions suitable to our players. That we haven’t come anywhere close to doing so proves how ill-prepared we were for this big series. The Indian camp went out of its way to ensure that England did not face any spin in the practice games, but they themselves did not do anything to be ready for the real Test. 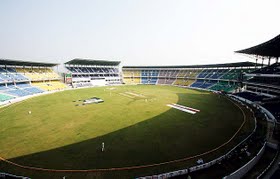 All we have got from Indians in this series is big-talking mouths but zilch in the form of performance. M S Dhoni became exceedingly greedy after the Motera win, and proclaimed that he wanted all out turners for the future Tests. He failed to realise that his own team isn’t good enough to deal with conditions that are supposed to be in the home team’s favour. As a result, India now find themselves 1-2 down in the series, a major embarrassment undoubtedly. Gautam Gambhir also came up with a bizarre defence for his and opening partner Virender Sehwag’s lack of runs, proclaiming they are the best openers in the country.

Enough is enough. The time has now come for the Indians to do all the talking with the bat and ball and not use their big mouths. The task for India is actually as simple as it is difficult. They know what they need to do – forget what the pitch looks like, and concentrate more on the individual performances and that of the team as a whole. Each one of the players, who will be part of the starting eleven in Nagpur, will need to perform. The bigger question however is whether they are good enough.

The issues for India begin right at the top. Sehwag and Gambhir have got some starts, but haven’t showed the application bat out even two sessions on a day. Should we call it the IPL effect? One seriously wonders whetherthe duo still has it in them to perform at the highest level, or are they just interested in the shorter version of the game now? Question marks remain over the other senior players as well even though only a couple of them have been made scapegoats and dropped.

One can only wonder now, how many more failures Sachin Tendulkar needs to experience before getting convinced that he is no longer fit enough to perform at the highest level. In the meantime, skipper M S Dhoni has defended his captaincy, stating that he won’t quit, but will try to bring the team back into shape. Sounds a great philosophy, but in the last year and a half, he has done nothing either with the bat or as leader to inspire confidence. Will be manage to find some inspiration at Nagpur?