Mumbai’s exceptional talent came to the fore against Perth

It is often said that the toughest of circumstances bring out the best in those who are mentally strong apart from being highly gifted. Going into their final league game against the Perth Scorchers at Delhi, Mumbai found themselves in a similar scenario.

It is often said that the toughest of circumstances bring out the best in those who are mentally strong apart from being highly gifted. Going into their final league game against the Perth Scorchers at Delhi, Mumbai found themselves in a similar scenario. That they needed to win to stay alive was obvious, but the victory had to be attained by a significant margin for them to oust Otago and qualify for the final four. On one end, it can be said that Mumbai had an advantage since they knew what they had to get to qualify. At the same time, it was a task easier said than done. 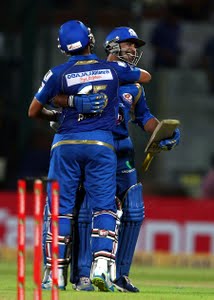 The big names in the team needed to stand up, and they certainly did so without any inhibitions. The hitting by Dwayne Smith and captain Rohit Sharma in particular, chasing a tough total, was awesome. Mumbai were forever under pressure as they needed to maintain a high rate throughout their chase, but Smith and Sharma called upon all their experience into play. Even after they were dismissed, Kieron Pollard ensured that their efforts did not go in vain, with a cameo that kept Mumbai ahead. A word of praise for Ambati Rayudu as well, who kept with cool with big hits when the situation got tense. Mumbai were aided by the fact that Perth’s bowling was poor, but that cannot take anything away from their amazing batting effort.

Luck went in Mumbai’s favour as they won the toss and decided to field first. In a scenario when you want to end with a specific net run rate, the best bet is to chase a total no matter how tough the target is. This is because you are absolutely aware of what you need to achieve to stay ahead in a race. Also, logic says that it is simpler to calculate the net run rate while chasing rather than when defending. Thus, Mumbai skipper Rohit Sharma made the absolutely right decision by deciding to field first once they won the toss.

The bigger challenge for Mumbai though was for their bowlers to restrict Perth to a total which Mumbai’s batsmen could chase within the stipulated overs. Since they needed to get to their desired target well before the usual 20 overs, Mumbai’s bowlers must have had at the back of their minds the fact that they needed to restrict Perth to as low a total as possible, to give their batsmen a fair crack at a chance of qualifying for the semi-finals. Their performance would have left the side with mixed feelings at the halfway mark.

Mumbai bowlers’ big advantage was that they were up against a weak batting line up. Perth were low on confidence following their previous performances, and the bowlers would have been buoyed by the same. However, Mumbai could not come up with an effort that blew away Perth. Nathan Coulter-Nile and Pragyan Ojha were impressive, but Perth still managed a competitive total thanks to Sam Whiteman’s unbeaten half-century. In the end, it was the unadulterated, explosive talent in Mumbai’s batting line-up that saw them through to the semi-finals.