Can't give excuses every day: Kohli after yet another loss in Indian T20 Cricket 2019

Virat Kohli's Bangalore slumped to their sixth consecutive defeat as they went down to Delhi by four wickets. Following yet another loss

Virat Kohli's Bangalore slumped to their sixth consecutive defeat as they went down to Delhi by four wickets. Following yet another loss, skipper Kohli said he has no more excuses for the team's abysmal performances.

Delhi chased down Bangalore target of 150 with quite some ease. Following the defeat, Kohli admitted, "We need to grab those chances, can't give excuses every day. We weren't good in the day again. That's the whole story of Bangalore this season."

Bangalore now join Delhi (earlier Daredevils) as the team with most consecutive losses in Indian T20 Cricket, six in 2013. "When the mind is cluttered, you wouldn't be able to focus on the chances that come your way. Clarity of mind is very important in the game especially if you want to convert the half chances and pull the game back. 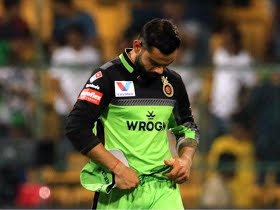 Kohli went on to add, "Shreyas got 67, he was dropped you never know, you can come back in the game at any time."

Bangalore have been lethargic having dropped 15 catches. Asked about it, the Bangalore skipper stated. "There's nothing more you can tell the team. We've asked the boys to take responsibility. It hasn't happened so far, and that's the reality."

Bangalore finished in the bottom half in the last two seasons as well, and this year seems to be no different.