IPL 8: Brendon McCullum struck brutal 81 runs before a brilliant spell of bowling from Ravindra Jadeja as Chennai Super Kings avenged its defeat over Rajasthan Royals with a 12-runs win

Brendon McCullum struck brutal 81 runs before a brilliant spell of bowling from Ravindra Jadeja as Chennai Super Kings avenged its defeat over Rajasthan Royals with a 12-runs win to virtually secure a place in play-off of the Indian Premier League in Chepauk Stadium, Chennai. By virtue of this win, CSK reclaimed the top spot in the points table. 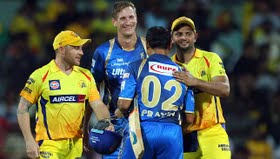 Opting to bat first on a rank turner Chennai made the mess of the start as Smith and Raina went to the dug out early. Both these batsmen tried to hit the ball on the up but neither got the elevation nor the distance and held on at mid-off. Faf du Plessis(29) and Brendon McCullum anchored the Chennai’s ship and added a crucial partnership of 101 runs for the third wickets. They scored at a good pace as well as saved the wickets for the late onslaught. McCullum hammered seven fours and four sixes in 61 balls inning of 80 runs. He along with du Plessis started their inning cautiously after losing two early wickets and the score was only 60 runs after 10 overs. Late cameo from MS Dhoni and Dwayne Bravo ensured that Chennai would get past the score of 150 and reached 157 eventually.

Chris Morris was sensational with the ball for the Royal’s taking three wickets for just 19 runs in four overs. He didn’t allow Dhoni and Bravo to score freely against him in the depth overs.

Chasing 158, Royals made a promising start as Rahane and Watson played some beautiful stroke in early of their inning. But as the ball got little older and stopped coming on to the bat, Rajasthan’s batter found it difficult to score. Rahane was first to get out when the score was 37 and from there on Royal’s never looked good. Wickets kept falling at the regular interval when two left arm orthodox spinners Ravidra Jadeja and Pawan Negi came in operation. Captaining in this match, Steve Smith struggled to get going with the bat was bowled in try to play the sweep. The highlight of this match was Watson’s catch that Bravo took. Bravo timed his jump to perfection at the long on boundary rope and took a one handed catch to get rid of Watson. The Royal’s chase didn’t look on from there on. Though some late flourish from Sanju Samson and James Faulkner raised some hopes for the Royals but with Samson getting out in the 18th over of the inning, Rajasthan hopes were literally over.

Ravindra Jadeja was the stand out performer with the ball of the CSK. He took 4 wickets, conceding only 11 runs in his four overs. Mohit Sharma and Bravo supported him well claiming three and two wickets respectively.

Rajasthan Royals will have to do lot homework for their last game against Kolkata Knight Riders. That will be the must win game of them in order to give themselves a chance to qualify for the play offs.