20-year-old Abu Hasan scores century on debut a no.10 to rescue Bangladesh in Khulna Test

A stunning final session on the opening day’s play of the Second Test at Khulna saw 20-year-old Abu Hasan score a century on debut. It was not a regular feat at the international level as Abu Hasan scored his maiden Test century coming in as low as no.10.Reggie Duff...

A stunning final session on the opening day’s play of the Second Test at Khulna saw 20-year-old Abu Hasan score a century on debut. It was not a regular feat at the international level as Abu Hasan scored his maiden Test century coming in as low as no.10.Reggie Duff of Australia was previously the only no.10 player to score a century on debut and that was way back in 1877! There was no doubt that Abu Hasan’s magic feat which was well complemented by an unbeaten fifty from Mahmuddulah saw Bangladesh to a decent 365 for 8 at stumps on Day 1 of the second and final Test. 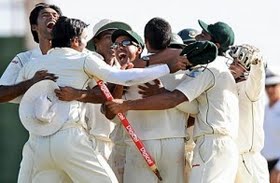 Bangladesh had won the toss and elected to bat first at the Sheikh Abu Naser Stadium in Khulna which was hosting its first ever Test Match. The Tigers made two changes to their line-up with opener Nazimuddin and Abu Hasan coming in for Junaid Siddique and Shahadat Hossain. West Indies made one change with Fidel Edwards replacing Ravi Rampaul who was out with a groin strain. Shivnarine Chanderpaul managed to recover from his illness to play in the Test Match.

After a poor start, Bangladesh hardly recovered and went to Lunch at 88 for 3. Another good session from the West Indian bowlers saw the Tigers slipping further to 186 for 6 in 54 overs. After Tea, Fidel Edwards took a couple of quick wickets and the West Indian top order was starting to mentally prepare to bat for sometime before Stumps on Day 1. However, the 9th wicket pair of Mahmuddulah and the left-handed Abu Hasan had other ideas. The duo smashed 172 runs in just 30 overs to rescue Bangladesh. Abu Hasan became the third Bangladeshi player after Aminul Islam (2000) and Mohammad Ashraful (2001).

Abu Hasan remained unbeaten on 100 (from just 108 balls with 13 fours and 3 sixes) while Mahmudullah scored a neat 72* (from 89 balls with 9 fours). For the West Indies, Fidel Edwards’ raw pace saw him pick 5 for 81 in 16 overs. Skipper Darren Sammy chipped in with a couple of wickets.