India fought hard on day three of the Bengaluru Test to put them slightly ahead of Australia by stumps. India were 213 for 4, with a handy lead of 126. But Aussie pacer Josh Hazelwood, who starred

India fought hard on day three of the Bengaluru Test to put them slightly ahead of Australia by stumps. India were 213 for 4, with a handy lead of 126. But Aussie pacer Josh Hazelwood, who starred for the visitors with three wickets believes things are still pretty much even.

Speaking to reporters at the end of day's play, Hazlewood opined, "It feels pretty level at the moment. They fought back really well in that last session. Credit to the two guys (Pujara and Rahane) out there. They stuck to their plans and fought hard and scratched away for quite a bit of amount of runs. So, I think it's pretty level."

Hazlewood got the big wicket of the Indian captain Virat Kohli lbw. Kohli reviewed the decision, but it stayed out, leading to an outburst from the Indian captain. Narrating the events Hazlewood said, "Initially, I just heard a bit of wood, so I sort of pulled out of the appeal. But I saw the guys behind and square of the wicket were pretty confident, and obviously it got given out. 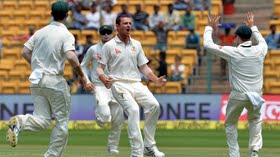 "After looking at the reviews, you could see the ball just touching the pad before the bat. So it had to stick with the on-field call," he explained on his decision to not appeal convincingly against Kohli.

"Yeah, he (Kohli) was confident he got some bat on that delivery which is why he obviously reviewed it straightaway. As we saw, it was pretty tight. I think the temperature raised a little bit but he had to stick to the on-field umpire's call," Hazlewood added.

Hazlewood also admitted that high intensity and the aggression was being shown by both sides. "Temperatures are rising a little bit - yesterday and today. It's pretty intense out there. But we are trying to stick to just playing on skills and be calm out there," he explained.