'God help Indian cricket', was how Sourav Ganguly reacted on learning that Rahul Dravid has been issued a notice from the BCCI ethics officer over conflict of interest allegations.

'God help Indian cricket', was how Sourav Ganguly reacted on learning that Rahul Dravid has been issued a notice from the BCCI ethics officer over conflict of interest allegations. 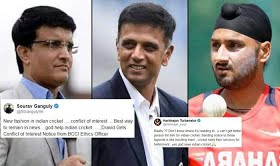 Gupta pointed out that Dravid is the present National Cricket Academy (NCA) director as well as the vice-president of India Cements Group that owns Chennai Super Kings, the IPL team.


Ganguly found support from another former teammate, Harbhajan Singh who posted, "Really ?? Don't know where it's heading to.. u can't get better person thn him for indian cricket. Sending notice to these legends is like insulting them.. cricket need their services for betterment.. yes god save indian cricket."


As per reports, Dravid has been given two weeks to reply to the allegations against him. It is pertinent to note here that Gupta had earlier also filed complaints against VVS Laxman and Sachin Tendulkar for being Cricket Advisory Committee (CAC) members as well as mentors of IPL franchises Sunrisers Hyderabad and Mumbai Indians respectively.


Even their former captain Ganguly was sent a notice for being Cricket Association of Bengal (CAB) president and mentor for IPL franchise Delhi Capitals. All three denied allegations of conflict of interest against them.