After a couple of below-par performances, Indian pace bowler Jasprit Bumrah returned to his best with a clinical bowling effort as India overpowered New Zealand at Mount Maunganui

After a couple of below-par performances, Indian pace bowler Jasprit Bumrah returned to his best with a clinical bowling effort as India overpowered New Zealand at Mount Maunganui to clinch the five-match series 5-0. Bumrah conceded only 12 runs in his four overs, including a maiden, while picking up three wickets. For the third game in a row, the Kiwis made a hash of a gettable target.

Defending a total of 163, Bumrah got India off to a great start by sending back Martin Guptill for 2. He returned to clean up Daryl Mitchell and stand-in skipper Tim Southee, and pave the way for India’s seven-run victory. In between, the in-form Tim Seifert (50 from 30) and Ross Taylor (53 from 47) featured in a 99-run stand for the fourth wicket to keep Kiwis in the hunt. This included 34 runs stolen in one over from Shivam Dube. 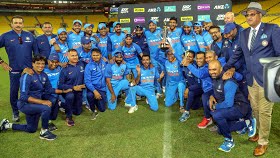 However, the dismissal of Seifert by Navdeep Saini brought India right back into the contest. From 116 for 3, the hosts crumbled to 132 for seven as Shardul Thakur sent back Mitchell Santner and Scott Kuggeleijn in the same over. The wicket of the set Taylor, with the score reading 133 for 8, was the final nail in the coffin. In the end, the Kiwis only managed 156 for 9 to concede the series 5-0.

Earlier, Rohit Sharma led the team in Virat Kohli’s absence, who was rested, and top-scored with 60 off 41 deliveries. He was forced to retire hurt with an injury to his calf. India lost their way after Rohit’s exit before Shreyas Iyer and Manish Pandey bailed them out and lifted them to 163 of three in 20 overs. This is the first time in history that a team has won all games in a five-match bilateral T20I series.

Man of the match Bumrah stated, “Feeling very good. The match got close at one point but we had a belief that if we can squeeze in one or two good overs, the match can get close. It was windy, I was trying to use the wind and the longer side of the boundary. Very happy with the learnings, different ground dimensions, first time in New Zealand; great result.”

Man of the series KL Rahul added, “Yeah, I am pleased. It is great to be standing here winning 5-0. Very happy that my performances could result in victories for India. We were happy to come into this series with confidence and to keep executing our skills every game. We came up with answers from every situation and it is a great result for me and the side.”