Team India, almost there but not quite

The opening ODI at Rajkot was a case of so near yet so for the Indians. They had their opportunities in the game, and had they taken the same, the result of the match could well have been different. The important aspect for the Indians though is to learn from their mistakes at Rajkot when they head into the Kochi ODI on Tuesday.

The opening ODI at Rajkot was a case of so near yet so for the Indians. They had their opportunities in the game, and had they taken the same, the result of the match could well have been different. The important aspect for the Indians though is to learn from their mistakes at Rajkot when they head into the Kochi ODI on Tuesday. Considering this has been an unbelievably prolonged bad run for India, in all formats of the game, one cannot expect things to change drastically overnight. At the same time, the Indian fan would expect significant improvements in the mentioned direction. 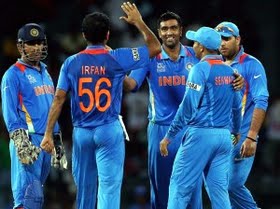 The death over bowling is a major worry for India. The bigger problem is they have no replacements. There is no point in brining veteran Zaheer Khan back into the ODI fold since he won’t be around when India play the 2015 World Cup. But, what about Ishant Sharma? The Indian selectors must be in a major quandary over him. He is India’s most experienced bowler at present, but has been far from the best. Among the others, Bhuvneshwar Kumar has impressed, but he has only just entered the arena and will have his moments of struggle, like in the first ODI. Ashok Dinda is also a question mark. He has the ability to pick wickets. However, from his international display so far it is evident that he is prone to being erratic.

Ishant, Kumar and Dinda were the three pace bowlers India went in with at Rajkot. Cricketing logic would say they should persist with the same attack since Ishant’s experience might as well come in handy. But, one wonders how confident the lanky fast bowler will be following the pasting he received at Rajkot. On the other hand, they have Shami Ahmed, who came up with a brilliant spell in the last ODI against Pakistan, his debut game. It can be argued that bringing in Ahmed for Ishant will be a big risk since that would mean playing three raw pace bowlers. On form though if they are the better options, why not try them?

Form, the same keyword applies to the batting as well. Cheteshwar Pujara wasn’t drafted into the eleven in spite of having struck a double and triple hundred in domestic cricket. M S Dhoni’s excuse over the same was mundane – that he did not fit into the scheme of things at Rajkot, which was incidentally his home ground. Hopefully, Pujara will find a place in the starting line-up at Kochi, he deserves one. Where to slot him in? Virat Kohli, who has been low on runs of late could be given a break. Else, they can always drop Ravindra Jadeja, who hasn’t been making any significant contribution with the bat at number seven.

It is also imperative that the Indian batsmen carry on after getting starts. At Rajkot, five of the top six got their eye in, but not one stayed till the end. This callous approach was as significant in India losing the game, as the death overs destruction by the English batsmen.