Having arrived in West Indies, with much hoopla and plenty of controversy surrounding the appointment of new coach Anil Kumble, team India will now be keen to get down to business.

Having arrived in West Indies, with much hoopla and plenty of controversy surrounding the appointment of new coach Anil Kumble, team India will now be keen to get down to business. Having arrived in West Indies for a four-match Test series, India will kick off their tour with a two-day practice match at St.Kitts against a WICB President's XI squad. Both teams will be allowed to bat on a day, and they can use as many players as available. Being so, Anil Kumble will be keen to give chances to as many people as possible in the short duration.

While the practice will be important for all, the game will be particularly significant for Mohammed Shami. The fast bowler, who has been out of action since an impressive show in World Cup last year, will be keen to prove his fitness, especially since his earlier return turned out to be a false alarm. Shami is extremely crucial to India's fortunes in the Test format, for they genuinely lack a wicket-taking fast bowler. When on song, he's really good. Shikhar Dhawan is another man whose performance will be observed closely. He has been in rather poor form in the longer format of late, and with others breathing down his neck, he will have to stay alert. 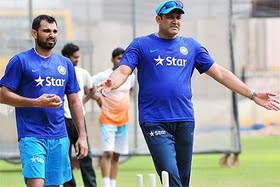 The other batsmen in the team will also like to get some practice time out in the middle. As mentioned above, Dhawan's spot is in bother. And, if Lokesh Rahul can carry on the great form he displayed in Zimbabwe, he can certainly replace Dhawan. Virat Kohli himself will want to spend some quality time out in the middle, as will Ajinkya Rahane as they are two of most consistent batsmen for India in the longer format. Of late, India have been playing a lot of shorter version games, so they will have to get back into the Test mindset. The practice match should help in that aspect. The game will be important for Cheteshwar Pujara and Rohit Sharma as they are fighting for a middle-order slot.

India's bowlers will also like to Test their skills out. Apart from Shami, they have the experienced Ishant Sharma, who will be keen to impress. In fact, India have a lot of pace bowling options with the likes of Bhuvneshwar Kumar and newcomer Shardul Thakur being chosen. Then, there is also Stuart Binny who can be used as a back-up bowler and lower-middle order bat. In the spin department, India have Ravichandran Ashwin as the main spinner. He succeeded in tandem with Amit Mishra in Sri Lanka. They will be keen to repeat their magic. Ravindra Jadeja is also available as a spin bowling-cum-batting option.

What would please India is the fact that they wouldn't be playing against a genuinely inexperienced side. WICB XI will have a number of players with international experience. They are skipper Leon Johnson, Jermaine Blackwood, Rajendra Chandrika, Shane Dowrich, Shai Hope and Jomel Warrican. While these players themselves will be keen to secure their places in the West Indies Test, they will also want to perform well and keep their names ahead. Perhaps, this will egg them on to give India a tough fight, which is what they need at the start of a tour.