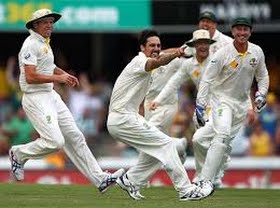 Pitch report :Adelaide is typically known as a friendly pitch for batsmen but that has been even more so this summer in the Sheffield Shield, following the move to drop-in pitches as part of the redevelopment of the venue. In the two Shield matches there this season, the pitch has not broken up on the fourth day and both games were drawn. Notably, the number of wickets taken by fast bowlers has dropped significantly with little pace in the surface. The forecast is for a few morning showers on day one, and possible showers on days four and five.

It was understandable that Australia took no risks with Michael Clarke and rested him from training on Tuesday after he rolled his ankle on Monday, for there is no venue at which he has been more productive than Adelaide Oval. Clarke has scored double-centuries in the past two Adelaide Tests - 230 against South Africa and 210 against India - and overall has made five hundreds there in eight Tests. Given he scored 113 in the first Test in Brisbane, and given the benign nature of the Adelaide drop-in pitch, there is no reason to doubt that he will be a major factor again, having been ruled fit for this Test. Kevin Pietersen has also enjoyed batting in Adelaide in the past, and in his three Ashes innings there has scored 158, 2 and 227. In 2006-07 he upset Shane Warne's plans and in 2010-11 he monstered Xavier Doherty for 61 off 60 balls, including ten fours and a six. Again, the battle between Pietersen and Australia's lead spinner - this time Nathan Lyon - will be key.

Last time Australia led in an Ashes series, they went on to sweep it 5-0. It was the summer of 2006-07 and, as it turned out, it was the last Test series that Shane Warne, Glenn McGrath and Justin Langer would play. Those retirements began a more or less steady decline for Australian cricket, which hit its nadir when England thumped Ricky Ponting's men with three innings victories in the next Ashes in Australia in 2010-11. Australia won in Perth that summer, and at Headingley in 2009, but at no point in either of those campaigns did they hold a lead. But after their dominant display at the Gabba, Australia are 1-0 up heading in to the Adelaide Test. It is an unfamiliar feeling, and one they cannot afford to relinquish too quickly. A draw would satisfy Australia with the bouncy WACA pitch likely to favour them for the third Test. On the new Adelaide Oval drop-in surface, and with the possibility of showers at times during the match, it might be the most likely outcome. England must find a way to regain their belief after being bundled out for under 200 in both innings at the Gabba, and a slower surface should help them handle Australia's fast men. But when huge totals are the norm, as at Adelaide Oval, even the smallest batting breakdown can prove match-turning. Both of these teams are capable of major batting collapses, let alone mini ones. It is not a time to lose focus. But which team will find it tougher to focus? The departure of Jonathan Trott due to a stress-related illness has forced England's attention off field and must have rattled them at least a little. Their lacklustre display at the Gabba seemed a case of resting on their laurels after their 3-0 win at home, and it is hard to see what they can have gained from their two-day game in Alice Springs. Australia, on the other hand, must not take their aggression overboard, with either their talk or their tactics. Hubris is a dangerous trait, and it is up to Michael Clarke and Darren Lehmann to ensure it does not creep into the squad. Since 2006-07 Australia's Ashes Test wins have always been followed by immediate defeat. This will be a very telling five days.

Full Scorecard
Last Five Match Result :
England: LDWDW
Australia: WDLDL
Match Stats :
Pietersen and Alastair Cook are both within reach of the 8000-run mark in Tests - Pietersen needs 69 and Cook requires 121. Only Graham Gooch, Alec Stewart, David Gower and Geoff Boycott have scored more than 8000 Test runs for England
Despite Clarke's success in Adelaide, Brad Haddin has a higher Test average at the venue, having scored 366 runs at 122.00 in his four Tests there
In the two Sheffield Shield matches this summer on Adelaide's new drop-in pitches, 54% of the wickets have been taken by spinners; last season only 22% of wickets came from spin