Comprehensive is not an adjective you associate with an Indian victory against Australia in Australia. However, this is exactly what transpired at Adelaide on Tuesday during India's first

Comprehensive is not an adjective you associate with an Indian victory against Australia in Australia. However, this is exactly what transpired at Adelaide on Tuesday during India's first T20, on the host's Australia Day and the visitor's Republic Day. India dominated Australia in every aspect in what was a rarest of rare performance. They were led admirably by Virat Kohli with the bat, once again. The Indian Test skipper just loves batting at this venue. With the ball, the youngsters and veterans combined nicely along with the spinners to outdo the Aussies. And, believe it or not. They outshone the hosts even in fielding. 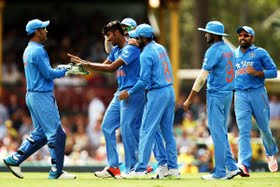 Which Kohli was the man of the match for his scintillating knock, putting him among the major positives would be akin to stating the obvious. More than India expecting Kohli to do well, it was a case of India almost knowing that he will do well. It is in the other aspects that India gained valuably. Having made an impressive ODI debut at Sydney, Jasprit Bumrah continued his good work in his T20 debut at Adelaide. Bumrah's unorthodox action has clearly taken the Aussies by surprise. To the bowler's credit though, he has created opportunities for wickets with some tight bowling, and has been rewarded for the same.
For the first time in the series, the Indian spinners also came into play. Of course, Ravichandran Ashwin and Ravindra Jadeja were aided by the fact that the pitch, rather unexpectedly, started holding up a bit. It was to the credit of the Indian spin duo though that they exploited whatever little help was available from the surface. It was a great fightback from them after Australia, at one stage, threatened to run away with yet another chase, as they have done so successfully all series. The standout aspect of the spin duo's performance was that not only did they claim wickets, but got big scalps, including the set and dangerous Steven Smith and Aaron Finch.
The match marked the comeback of a couple of veterans for India in the form of left-arm pacer Ashish Nehra and southpaw Yuvraj Singh. While the latter did not have a lot to do as he did not get an opportunity to bat, Nehra opened the bowling, and had a mixed outing. He beat Finch a couple of times early in his spell, but was not menacing by any extent. Nehra though did well to keep things tight in his second spell. Another debutant Hardik Pandya had a horror initiation, spraying the ball all over the place. But, credit to MS Dhoni for backing him and, in the end, the youngster managed to finish with a couple of scalps.
What India did well in the game was respond positively to the tricks thrown at them by the Australians. Like India did with Nehra, Australia also recalled Shaun Tait, hoping his pace and experience could count for something. Instead, Rohit Sharma and, later, Kohli attacked Tait mercilessly, not giving him much of a chance to settle. Suresh Raina came in under pressure and, while he clearly wasn't at his best, he definitely showed glimpses of old towards the end. Last, but not the least, Dhoni came in and smashed two trademark boundaries. If only briefly, the clock had been turned back.
-- By A Cricket Analyst