Chennai Super Kings finally batted first and that changed their fortunes as they registered a fine win against the Sunrisers Hyderabad. Watson and Rayudu hit impressive forties and Bravo, Thakur closed out the game with the ball as CSK defeated SRH by 20 runs.

MS Dhoni sprung everyone by surprise as he sent Curran to bat alongside Faf du Plessis after winning the toss. Curran was sent primarily as a pinch hitter, and faced all the deliveries in the first two overs by hitting just one boundary. Deprived of strike, du Plessis hung his bat at a Sandeep Sharma outswinger, only to nick it behind his very first ball. Curran however, was successful in his mission as he smashed two fours and two sixes in the fourth over bowled by Khaleel. Sandeep had more success as he castled Curran and his figures at the end of five overs read 3-0-10-2. 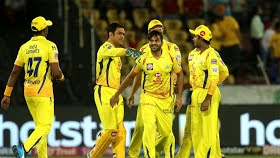 Watson and Rayudu settled in and followed a cautious approach. SRH kept things quiet with Nadeem and Rashid going through their overs quickly. However, around the 12 over mark, CSK batsmen decided to put their foot on the accelerator as Rashid was attacked and three sixes were scored off him, two by Watto and one by Rayudu. Their aggressive intent didn’t last for long as both of them were dismissed in their forties and it seemed like all the good work done was lost. CSK required a strong finish and that did happen as vintage Dhoni joined hands with Jadeja. Dhoni struck two fours and a six in his cameo of 21 off 13 balls, while Jadeja combined deft touch with brute force to finish at 25 off 10, and the score stood at a competitive 167-6.

Warner and Bairstow got their team off to a steady start with 21 runs coming from the first three overs. Sam Curran drew first blood with the ball as well, with an inside edge landing safely into his hands after thudding into Warner’s pads and ballooning up in the air. Pandey was run out two balls later, via a direct hit from DJ Bravo.

Williamson and Bairstow showed little urgency in the next few overs as the required rate hovered over 10 around the nine over mark. Ravindra Jadeja went through the defences of Bairstow, as his knock of 23 off 24 balls ended. Priyam Garg was sent ahead of Vijay Shankar and he struggled to get going, even as Williamson was playing some delightful shots. Karn Sharma got rid of Garg as we entered into the business end of the innings.

The required rate neared 15 runs per over with four overs to go and new batsman Shankar had no option but to go after the bowling. He hit a six off the very first ball but was caught well by Jadeja at third man. Williamson hit a couple of boundaries to bring up a classy half century but holed out to Thakur off Karn Sharma. With 42 to get from 16, Rashid gave some hopes of a miracle by hitting a six and four before he got out hit wicket. Thakur bowled a fine penultimate over as he gave just five and Bravo did the rest as CSK won a rather close encounter.