Only ODI: Australia register unimpressive win over Ireland at Belfast

Australia beat Ireland in the one-off ODI played at Belfast on Thursday by 23 runs via the Duckworth Lewis method in a rain-marred encounter. Batting first, Australia got off to a brilliant start courtesy debutant Joe Burns and David Warner

Australia beat Ireland in the one-off ODI played at Belfast on Thursday by 23 runs via the Duckworth Lewis method in a rain-marred encounter. Batting first, Australia got off to a brilliant start courtesy debutant Joe Burns and David Warner, both of whom registered half-centuries, and featured in a 100-plus stand. However, the middle order collapsed yet again as Australia failed to maintain the momentum. They struggled their way to 222 in 40.1 overs, when the rain came in and stopped play. Ireland's response never got underway. Niall O'Brien and Ed Joyce got 40s, but the rest failed to get going. 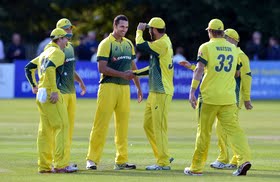 Burns had it rather easy on his debut. The Ireland attack is among the weakest in the world, and Burns couldn't have asked for a friendlier attack to make his debut against. Craig Young kept things very loose early on, and Burns was benefited in the process. He hit three consecutive fours early on in his innings to increase his confidence further. At the other end, Warner was his usual attacking self, and was least challenged by the gentle opposition. The opening duo brought up the 100-run stand in 88 balls. The partnership carried on for a bit longer as Ireland looked clueless.

Young, it was who eventually struck, after missing a wicket due to overstepping. He eventually had Burns caught behind for 69. At the other end, Warner carried on in the company of skipper Steven Smith. However, after having hit seven fours and three sixes, Warner was dismissed by Tim Murtagh for 84. Australia were 165 for 2 at that stage, but the middle order woes continued. Smith fell for 21, and then the Aussies went on to lose Glenn Maxwell, George Bailey and Mitchell Marsh cheaply. At the other end, veteran Shane Watson was playing a good cameo when the rain arrived.

Batting has been Ireland's strength, but 181 in 24 overs was too much for them against a reasonably strong Aussie attack. Mitchell Starc yorked William Porterfield early on while Paul Stirling was clueless against Nathan Coulter-Nile. With two of their key wickets gone, Ireland needed a steadying partnership. The experienced Niall O'Brien and Joyce both got to breezy 40s, but with the run-rate rising, they fell to Maxwell going for the big hits. With the other O'Brien -- the big-hitting Kevin -- missing out due to injury, Ireland's lower order lacked sting. Coulter-Nile and Pat Cummins combined to finish them off. Australia won by 23 runs, but their batting woes remained.