Zimbabwe are five wickets away from a historic Test win tomorrow at Harare. Pakistan chasing a target of 264 looked to bat out positively but somehow lost key wickets to stare at a defeat on the final day.

Zimbabwe are five wickets away from a historic Test win tomorrow at Harare. Pakistan chasing a target of 264 looked to bat out positively but somehow lost key wickets to stare at a defeat on the final day. While Zimbabwe have done most of the work needed to win the Test, they have a big obstacle in the form of Misbah-ul-Haq, the Pakistani Skipper, who is well capable of spoling the party of the hosts. Zimbabwe have 106 more runs to defend and a result is more than likely to come by the morning session itself. 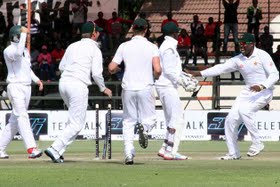 Zimbabwe’s opening in the final session came from Prosper Utseya, who forced a bat pad edge to shortleg from a forward defence played by Khurram Manzoor. The Pakistani opener got out soon after reaching his second fifty of the game. Manzoor scored 54 from 66 balls with 11 fours before getting out in the 23rd over with Pakistan at 90 for 3. Soon after that, Younis Khan (29 from 47 balls) was bowled round his legs after shuffling far too across to flick Brian Vitori.

Prosper Utseya struck again with his off breaks to have Asad Shafiq edge a bouncy delivery to the keeper to have Pakistan down and out at 133 for 5. Zimbabwe couldn’t make further inroads before stumps which would have certainly shut the door of a Pakistani victory.

Update at Tea on Day 4: Tendai Chatara bowled Zimbabwe back in the contest by Tea as Pakistan finished the afternoon session at 55 for 2 in 15 overs. The visitors started off on a positive note before Mohammad Hafeez (16) was caught off a leading edge in the 8th over at mid on in an early flick to a Chatara delivery. In the 12th over, Chatara produced a beauty which angled in but held its line to hit the off stump of a squared up Azhar Ali (0). Pakistan got their runs mostly due to Khurram Manzoor, who has looked good for his 35*.

Update of Zimbabwe 2nd Innings: Zimbabwe got bowled out for 199 in their second innings to leave Pakistan a competitive target of 264 to chase in the Second and Final Test at Harare. The hosts resuming the penultimate day’s play on 121 for 4 did reasonably well to add 78 more runs to their overnight total before they were bowled out inside an hour after the lunch break.

Skipper Brendan Taylor, who was holding the fortunes for Zimbabwe, saw three specialist batsmen fall in succession at the other end in the first hour. Vusi Sibanda (10) was first to depart, edging a drive off Rahat Ali while Malcolm Waller (3) was out to Saeed Ajmal, cutting a loose delivery in the air to point. Chigumbura got caught behind poking at an away swinger from Junaid Khan to leave the hosts at 156 for 7.

Taylor eventually got out, edging a square drive off Rahat Ali to gully after an 83-ball 27. Wicket Keeper Richmond Mutumbai was the hero of the session for the Zims, scoring a useful 29 (from 59 balls) before getting caught at covers with a leading edge off an Ajmal doosra. Rahat Ali wrapped up the innings with his second 5-wicket haul with no.10 Tendai Chatara caught off an attempted slog.