Following the conclusion of the Ashes battle, England and Australia will kick-off the limited overs contests, beginning with the now obligatory one-off T20. Even though the shortest

Following the conclusion of the Ashes battle, England and Australia will kick-off the limited overs contests, beginning with the now obligatory one-off T20. Even though the shortest format of the game is believed to have taken the cricketing world by storm, there is hardly any hype, nowhere close to the Ashes build up, which is proof that the format is yet to find universal acceptance as a serious contest. Even though it will count as an official international game, it will most probably be seen as a practice game leading into the proper one-day series. Of course, both sides would be keen to taste the winning feeling, but it is no secret that a loss wouldn't give them sleepless nights. 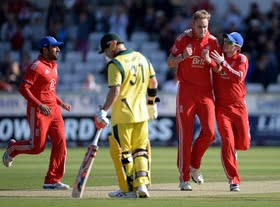 England are being led yet again by the smart limited-overs bat Eoin Morgan. Following the disaster in the World Cup, both as leader and as a batsman, Morgan came back well as England impressed in their previous limited overs challenge against New Zealand. Morgan would be keen to continue the same. Of course, Australia being champions in the 50-over format gives them an edge even in the T20 encounter. But, England have the players to compete, and come out on top. Opener Alex Hales will be a key batsman. If he gets going, England often end up doing well. Jason Ray has also proved to be a good partner in recent times. The openers will have a crucial role to perform

England have some decent young talent in the middle order as well. Apart from Morgan, Moeen Ali is someone who is capable of coming up with the big hits. And, he is a more than useful spin bowler as well. Ben Stokes is another batsman who can hit the ball a long way, and is a perfect T20 package given his bowling skills. The Englishmen would also be hoping that wicket-keeper batsman Jos Buttler comes back to form after a torrid Ashes. His batting style is perfectly suited to T20, so that would help for sure. In the bowling, they would be depending on the improving Steven Finn, impressive leggie Adil Rashid, and Chris Woakes as well. Uncapped left-arm pacer Reece Topley has also been chosen in the squad.

Australia, on the other hand, will be led by Steven Smith, who is now all set to lead in at least two formats, with Michael Clarke's retirement. Aaron Finch's injury woes mean he will captain the team in the sole T20 as well. David Warner, who began his career as a T20 specialist, will be happy to return to the format if only for one game. Among the other key batsmen for Australia in the T20 apart from Smith and Warner will be George Bailey, who can turn matches with the bat. Joe Burns made a fantastic debut against Ireland, and he should keep his opening spot for the T20 match at Cardiff as well.

Shane Watson may be out of favour in the Test format, but he surely can still make an impact in the shorter versions. Australia will be hoping he delivers to potential. Interestingly, leg-spinner Cameron Boyce has been included only for the T20 at Cardiff, so there is every chance of him playing. The other bowling options include promising spinner Ashton Agar, Pat Cummins, Nathan Coulter-Nile and James Pattinson. Above all, they have the ex-factor in the form of Glenn Maxwell. If he comes off, all equations will be laid to rest.