Chennai Super Kings became the first team to enter the Semi Finals of CLT20 2013 after picking up their third victory in a row. In a Group B Match at Ranchi this evening,

Chennai Super Kings became the first team to enter the Semi Finals of CLT20 2013 after picking up their third victory in a row. In a Group B Match at Ranchi this evening, CSK eased to an 8-wicket win with 4.1 overs to spare over Brisbane Heat. The Aussie domestic team led by James Hopes has bowed out of the tournament with their third straight defeat.

Bowling first after winning the toss, Chennai Super Kings had Brisbane Heat collapse to a hopeless position of 66 for 6 in 12.3 overs. Brisbane Heat somehow managed to escape the embarrassment of getting bowled out cheaply thanks to a 71-run stand between Wicket Keeper Chris Hartley (35 from 32 balls) and Ben Cutting (42* from 25 balls with 5 sixes) for the 7th wicket. Brisbane Heat made a match out of it by posting a modest total of 137 for 7. 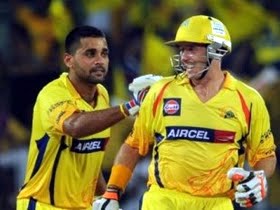 Ravindra Jadeja was the pick of the bowlers taking 2 for 18 in 4 overs. R Ashwin was even more economical conceding just the 10 runs while taking a wicket in his 4 overs. Brisbane Heat were totally clueless in playing spin with even part-timer Suresh Raina taking 1 for 9 in 3 overs.

Chasing such a low target, CSK had another plus going into the Semis with opener Murali Vijay finding some form after two failures. Vijay hoisted a couple of sixes off Nathan Hauritz and smacked the pacers too to help himself to 42 from 27 balls. The 29-year-old got out to a brilliant catch at deep backward squareleg top edging a pull shot off Cutting.

CSK had the run chase sealed with an opening start of 75 in 9.2 overs. Michael Hussey finished the game with a well paced 57* from 48 balls with 7 fours. Suresh Raina with 23 from 15 balls and Skipper MS Dhoni with 13* from 5 balls made short appearances in the middle with the bat. Michael Hussey got the Man of the Match ahead of the bowlers.