The opening Test at Galle between Sri Lanka and New Zealand is tantalizingly poised for an early finish possibly inside four days.

The opening Test at Galle between Sri Lanka and New Zealand is tantalizingly poised for an early finish possibly inside four days. The second day’s play saw as many as ten wickets go down as New Zealand fought their way back immensely. At the close of play on Day 2, New Zealand are ahead by 9 runs with nine wickets in hand in their second innings.

The second day’s play began with Sri Lanka at 9 for 1 in reply to New Zealand’s 221. Tim Southee along with Trent Boult made early inroads as the Lankans slipped to a disastrous 105 for 5 at Lunch time. After the break though, the hosts fought back superbly through the pair of Skipper Mahela Jayawardene and Angelo Mathews who put on 156 runs for the 6th wicket taking Sri Lanka from 50 for 5 past the 200-run mark! 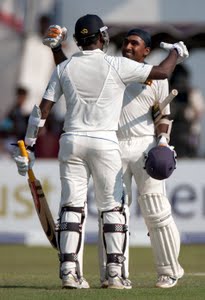 James Franklin broke the 6th wicket stand removing Mathews for 79 (from 154 balls with 12 fours and a six). Mahela Jayawardene battled for some more time to score a precious 91 (from 176 balls with 11 fours and a six) to take SL past the New Zealand’s first innings total. Sri Lanka were eventually bowled out for 247 in 80.2 overs which gave them a slender lead of 26 runs. Tim Southee claimed 4 for 46 in 18 overs and off spinner Jeetan Patel took 3 for 55 in 23 overs.

By Stumps, New Zealand collected 35 runs in 10 overs having lost the key wicket of Brendon McCullum (13) to Rangana Herath.

Roulette is one of the original table games at any casino. Now with technology, India's most popular roulette game takes the fun to you, allowing you to play whenever and wherever you are.
Play live casino games at 10Cric and enjoy HD quality live casino games with real live dealers from all around the world. Gamble on popular games such as roulette and blackjack, streamed directly on your phone!