There are two things about Shane Watson that cannot be denied -- one he is extremely talented, and two he hasn't done justice to his potential. Both these statements hold equally true especially in terms of Watson's

There are two things about Shane Watson that cannot be denied -- one he is extremely talented, and two he hasn't done justice to his potential. Both these statements hold equally true especially in terms of Watson's enigmatic Test career, which has come to a somewhat abrupt end, but not unexpectedly after he was dumped from the playing eleven following a poor show in the opening Ashes Test at Cardiff. Watson's woes in what turned out be his final five-day game -- starts not converted, lbw troubles and ineffective bowling -- were symptomatic of his Test career. In the end, it would sound weird, but it was a fitting end to Watson's career, as his effort at Cardiff pretty much summarised his Test career. 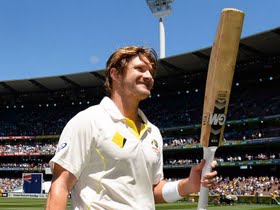 If you look at Watson's Test numbers closely, it turns out to be a rather disappointing one, particularly for someone rated so highly in Australian circles -- 59 Tests for 3700 plus runs and 75 wickets, averaging in the mid-30s with the bat, and low 30s with the ball. What the record also tells you is the number of matches Watson missed since his Test debut a decade back. The all-rounder was absent for almost half of the Tests that Australia played during these 10 years, mostly due to injuries, and sometimes due to poor form as well. Either ways, he was always struggling to be a permanent fixture in the Test side.

It wouldn't be wrong to say that fitness and temperament issues were major hindrances to Watson charting a successful Test career. He had to battle numerous injuries right from the start of his career, and that took a heavy toll on his body. He didn't help himself either when he had his chances. Four hundreds and 24 fifties translates into an extremely poor conversion rate, especially when one takes into consideration that he also got a decent hit at the top of the order. For a brief period that he was injury-free, Watson could have flourished, and made up for lost time. He did come up with some good performances, but those were the clichéd few and far in between.

With the bat, it was his loss of concentration that often hurt Watson. He looked good and hit some glorious boundaries, but often gave it away with a soft dismissal, most often to deliveries that did not deserve wickets. Watson's tendency to play across the line and fall over was also a major hindrance in his success at the Test level. After a while, a Watson lbw almost became a mandatory feature of his batting wherein he would be trapped against the run of play. His use of DRS also was often naive, when it was clear to the naked eye that he was in front of the stumps. Watson's bowling too never attained impressive heights. Again, the injuries did not help, and he was mostly a containing bowler.

While Watson did not help his cause, it is also true that he has been among the unluckiest of players from the last decade, and this is not pertaining only to his injury woes. Watson has been involved in a number of unlucky dismissals. In a Test match where he opened with Simon Katich, a misunderstanding saw both being stranded at one end, with a forlorn Watson making the long walk back to the pavilion. In the ongoing one-day series, he was dismissed off a defensive stroke, unable to kick the ball away from the stumps. And now, he finds himself ruled out of the ODIs with another strain. Typical Shane stuff.