BAN vs PAK 2nd Test Live Scores: Pakistan carried on their dominance in Mirpur for the third day in a row, coming up with a highly competent all-round show to leave the struggling hosts with the unenviable task of chasing down an improbable target of over 500.

Pakistan carried on their dominance in Mirpur for the third day in a row, coming up with a highly competent all-round show to leave the struggling hosts with the unenviable task of chasing down an improbable target of over 500. By the end of the day's play, they had claimed one fourth-innings Bangladesh wicket as well, increasing the possibility of a fourth-day finish. Pakistan's fast bowlers as well as their spinners have been extracting assistance from the pitch unlike the Bangladesh bowlers, who have failed to make any impact. Under the circumstances, Bangladesh have a massive task on hand. 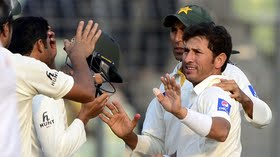 Having taken out half of Bangladesh's side the day before, Pakistan needed less than 48 overs to clean up the entire Bangladesh side (Shahadat Hossain was unavailable to bat). Shakib Al Hasan hung on gamely from one end even as Pakistan kept claiming breakthroughs from the other end. Wahab Riaz was the man responsible for dealing Bangladesh with the big blows. He had Soumya Sarkar caught at short cover, and then sent back Shugavata Hom back with a rising delivery as the batsman failed to control his shot.

Shakib finally found any ally in Mohammad Shahid. The duo featured in a 63-run stand, even as Shahid contributed just one. The all-round used the depth of the crease very well, and forced a number of boundaries off Yasir Shah. He went on to hit three successive fours off Riaz later in the day, after he was reprieved off the same bowler earlier in the innings, courtesy a no ball. Pakistan's frustration finally ended when off his 20th delivery, Shahid lobbed a simple catch to silly point off Yasir's bowling.

Shahid continued his inspired show with the ball as well, dismissing both the Pakistani openers, Mohammad Hafeez and Sami Aslam cheaply. Soumy Sarkar also chipped in as he sent back the well-set first-innings double centurion to claim his first Test victim. At 3 for 49, Bangladesh had staged a mini comeback, but skipper Misbah-Ul-Haq played an out-of-character to derail any faint hopes Bangladesh had of regaining some sort of momentum. He blasted his way to 82 from merely 72 balls being especially severe on Taijul Islam, whom he hit for a couple of sixes. Misbah also slammed a maximum off Shakib.

The Pakistan skipper featured in a good partnership with Younis Khan, as the experienced duo shut the hosts out of the game. Younis made a rather patient 39, even as Misbah went berserk, in the process going past Viv Richards' Test tally. Pakistan declared once Misbah was dismissed, setting Bangladesh exactly 550. The openers Tamim Iqbal and Imrul Kayes, who had set a record partnership in the previous match, began confidently again. But, Yasir got one past Kayes' defence to sent Pakistan into jubilation. Bangladesh now needed a bigger miracle as compared to Khulna to save the Test.