Sunday was yet another occasion in the last year when India’s famed batting line up came a cropper. In the ongoing series against Pakistan, none of the top and middle-order batsmen have looked comfortable against either pace or spin.

Sunday was yet another occasion in the last year when India’s famed batting line up came a cropper. In the ongoing series against Pakistan, none of the top and middle-order batsmen have looked comfortable against either pace or spin. Mohammad Irfan and Junaid Khan have troubled hem right throughout the three games even as Saeed Ajmal has put question marks on India’s capability of playing spin with some very good support from Mohammad Hafeez. It isn’t as if the bowling has been unplayable, but just the fact that the Indian batsmen have looked completely jaded. 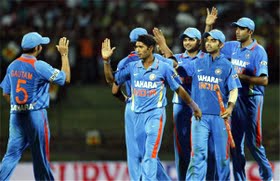 The need of the hour is definitely for an overhaul of the batting hour at least for the coming times. While the likes of Virender Sehwag and Rohit Sharma must be shown the door, it is also time to give the few others a rest. Sometimes when you play international cricket day in and day out, unknowingly deficiencies creep into your game. These can be corrected only when you take some time out of international cricket and work on the same either in the nets, or still better by playing the less competitive domestic cricket.

Gautam Gambhir, for one, definitely needs to work a lot on his technical flaws. Over the last year, he has been as indecisive as he ever has been throughout his career. His troubles began in the Test series in England and ever since he just hasn’t been able to overcome the same. The left-hander has either left his bat dangling outside the off-stump or has failed to keep deliveries away from his stumps. His struggles have carried on too long, and the time has come for the selectors to give him a forced break and ask him to work on his deficiencies in right earnest.

The likes of Virat Kohli and Suresh Raina also deserve a break. Although they have been among the consistent performers for the Indians in the last year and a half, the fact is that aren’t looking in the right frame of mind to play international cricket. Their dismissals in recent times have been indicators of a muddled mind, in which the brain sends wrong signals, in Kohli and Raina’s case possibly due to lack of rest. Being away from the limelight of international cricket may just be what the young duo needs to rekindle the fire in them. To put it succinctly, India’s batting woes are as much in the mind as much as they are technique related.

It may be argued that Yuvraj Singh is coming back after a year-long break following his battle with cancer. Here it must be remembered though, that when he was picked for the Indian side, he hadn’t played a lot of domestic games, and the lack of match practice is perhaps is now showing. Leaving him out as well would mean going in with a completely naive batting order. That wouldn’t be a bad thing considering it was the unheralded bowling that kept India’s fire burning in the losing cause against Pakistan.