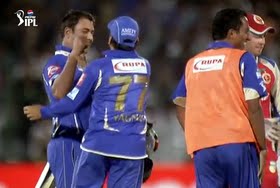 Sanju Samson is Man of the Match, what a moment for him: "I would like to thank my family, my team. I was prepared for it and it's my day. I was trying to get maximum runs in the Powerplay." A man of few words.

Virat Kohli: "Another loss unfortunately. We were 10-15 runs short. Rajasthan batted really well. I got out at the wrong time, one batsman who could have added another 20-30 runs could have changed things. We got really excited looking at the wicket, didn't bowl at a good length. We bowled really short initially and gave many boundaries."

Rahul Dravid: "We were on the back foot in the first six overs, with Gayle going the way he did. The way we batted in the first six, and the way Sanju batted, we just seemed in control right through. With 13 in two overs, I thought it was going to comfortable. We need to focus a game at a time. Lot of cricket left to be played."

Tillakaratne Dilshan has 76 runs in five innings at 15.20 in this IPL. More damningly, his strike rate has been 81.72.

Fast bowler James Faulkner claimed the first five-for of IPL 2013 against Sunrisers Hyderabad. At the end of the game, he led the tournament's wicket tally.

Chris Gayle, with 54.97, is the only player with a batting average over 50 in the IPL (min 1000 runs). Shane Watson is one of only three players averaging in the 40s - his 42.08 is fourth on the list, behind Gayle, Michael Hussey and Shaun Marsh.

Ajit Chandila's economy rate of 4.66 is the best among bowlers who have bowled 15 overs or more in IPL 2013.