Sri Lanka were declared as winners by 17 runs in a rain-curtailed Second ODI at Colombo. Batting first, the hosts struggled to reach 223 for 9 in 49.2 overs before heavy rain ended their innings abruptly.

Sri Lanka were declared as winners by 17 runs in a rain-curtailed Second ODI at Colombo. Batting first, the hosts struggled to reach 223 for 9 in 49.2 overs before heavy rain ended their innings abruptly. South Africa were given a stiff revised target of 176 from 29 overs. The visitors slipped to 104 for 5 in 21 overs when rain had the last laugh.

The match was off to a 30-minute delay because of a damp outfield. The South African bowlers did a much better job compared to what they did in the First ODI. Morne Morkel provided the first breakthrough of the afternoon when Upul Tharanga miscued a pull to mid on in the 4th over. Dilshan and Sangakkara added 59 runs steadily after that for the 2nd wicket. Sangakkara got out in the 18th over smacking Phangiso to mid off after a slow 60-ball 37. Mahela Jayawardene looking to get on with the game was bowled trying to switch hit a full ball from Robin Peterson.

Dilshan, who worked his way to a 64-ball 43 perished in the 30th over, thanks to a brilliant catch from AB de Villiers, diving full length to his right. Morkel got this wicket with a short ball to leave SL at 120 for 4. A superb yorker from Ryan McLaren at the start of the batting powerplay had Lahiru Thirimanne out. Comeback man Jehan Mubarak struggled for 15 balls before driving early to get caught and bowled by Duminy. There was a short rain break with SL at 181 for 6 in 43 overs. 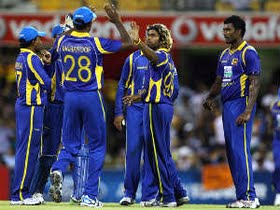 When play resumed, Sri Lanka got to 223 for 9 in 49.2 overs before rain once again arrived and this time to end the first innings abruptly. Skipper Dinesh Chandimal played a crucial knock of 43 from 51 balls. The South Africans were guilty of conceding 28 extras! Morne Morkel was the pick of the bowlers with 3 for 34 in 10 overs.

South Africa were given a stiff target of 177 from 29 overs despite restricting the hosts to a modest total. The visitors struggled to get going and the absence of star batsman Hashim Amla owing to an on-field injury early on made matters only worse.

Sri Lanka got an early wicket in the first over itself with Malinga yorking Robin Peterson. In the 7th over, Thisara Perera produced a lovely away going seamer to have Duminy caught behind to have the Proteas at 39 for 2. Rangana Herath struck early in his spell trapping Alviro Petersen (24 from 28 balls) lbw with the right hander playing all around an arm ball.

In the 13th over, the match was as good as over when Skipper AB de Villiers was dismissed, lbw to Dilshan after shuffling far too across and missing a sweep shot. De Villiers was given not out initially but the decision was overturned when Dilshan asked for a review.

Faf du Plessis became the 50th scalp for Herath in ODIs when he was forced to edge a turning ball to the keeper which left SA at 69 for 5 in the 14th over. Sri Lanka smartly rushed through to complete 20 overs fully knowing that the Proteas were well behind the D/L total. Rain had the last laugh with the South Africans stranded at 104 for 5 in 21 overs, 17 runs short of the D/L total. Dinesh Chandimal was adjudged the Man of the Match.

Toss and Teams: Sri Lanka have won the toss and elected to bat first. Hashim Amla returns to the XI after recovering from an injury and making way for him is Colin Ingram. Sri Lanka remains unchanged. No overs have been lost despite the delay.

Rain Update: Overnight rain has delayed the start of the Second ODI between Sri Lanka and South Africa at the Premadasa Stadium. The match is expected to start at 3:00 PM local with the rain stopping and the delay is because of the wet outfield.