June 1, 2013 marks the 11th death anniversary of late South African cricketer Hansie Cronje. The former Proteas skipper, who was once among the most respected guys in world cricket, was unarguably the biggest name to fall from grace during the match-fixing scandal that rocked world cricket at the turn of the new millennium.

June 1, 2013 marks the 11th death anniversary of late South African cricketer Hansie Cronje. The former Proteas skipper, who was once among the most respected guys in world cricket, was unarguably the biggest name to fall from grace during the match-fixing scandal that rocked world cricket at the turn of the new millennium. There were a few other renowned names, who also got indicted in the dirty play, but it was Cronje’s involvement that was most unbelievable. Here was a man cricket fans around the world looked upon as a brand ambassador. Alas…

All those indulging in fixing activities today must look at the tragic end that Cronje met to understand the kind of trouble they are getting themselves into. Of course, easy money always finds a way of getting into those weak-hearted. This is why many stories of players’ involvement in illegal activities are coming to the fore. It is an iconic co-incidence that Cronje’s death anniversary has come it the midst of the IPL spot-fixing saga. At the same time, it is also an opportunity for the people who are truly bothered about saving cricket to use Cronje’s example and try and reduce rampant corruption in the game. 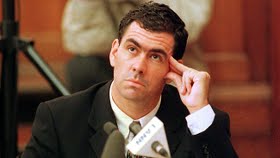 The life and times of Hansie Cronje could be used as a case study to guide young cricketers, who could be tempted to go on the wrong path. Remember for all good that he did not the cricket field, his name will forever be associated with match-fixing, and the subsequent storm that shook the very foundation of the cricketing fraternity. As a player alone, Cronje had exceptional ability. His statistics prove this point –3714 run in 68 Tests averaging 36 and 5565 runs in 188 ODIs averaging 39. Also, he was regarded amongst the most shrewd leaders of his time. In fact, in 53 Tests and 138 ODIs he was the captain.

Until his playing days, it seemed that Cronje had been around the international arena for ages. Then, one ugly day, the match-fixing scandal broke out, and Cronje’s reputation was in tatters. Suddenly, the realisation that this man was only 30 dawned upon us, and soon the harsh reality that he would no longer be seen on the cricket field. The player and the captain, who was an omnipresent feature in South African cricket and, to an extent, even world cricket, was suddenly no longer leading his side onto the field. It was as if South African cricket was orphaned.

The biggest tragedy unfolded a couple of years later. On June 1, 2002, just two years after he was banned for life for his involvement in match-fixing, Cronje was gone from the world – killed after the cargo plane in which he was travelling crashed in the mountain range near his home town in George. He was all of 32. The man who had achieved so much at such a young age only to comprise all of it was no more. Some positive souls believed that Cronje’s tragic story would serve as an impediment to those to falter on to the wrong path. Sadly, 11 years later not a lot seems to have changed…