Ajinkya Rahane was ready to take blows on the body in the nets: Pravin Amre

Ajinkya Rahane scored a brilliant hundred, his 12th in Test matches, to help India square the four-match series at Melbourne 1-1. Rahane’s coach and former India cricketer Pravin Amre has now revealed that Rahane worked very hard in the nets in India before heading to Australia.

Amre was quoted as saying by Sports Today, “Ajinkya was on his own (during practice sessions). He knew what he was doing and he was asking my throw-down person to bowl him in this and that area, he wanted to practice for this type of a balls.”

Amre, who played 11 Tests and 37 ODIs for India, added that Rahane even took blows on the body, knowing very well what he would face Down Under.

“He made sure that he will have less reaction time when he was going to prepare in those practice sessions. He was ready to take the blows on the body because he was aware that there will be sessions in Australia where he has to take blows on his body to survive that session,” Amre went on to add. 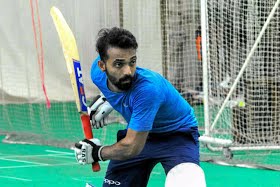 “I think that’s what he did before going and I was really glad to see how he was preparing, because Ajinkya’s story is that he was successful only because he prepared really well before each and every tour,” Amre further said.

India lost the first Test under Virat Kohli’s leadership at Adelaide, but came back strongly with Rahane at the helm in the Boxing Day Test at the MCG. Without Kohli and Mohammed Shami, Rahane stood up for the team.

There were excellent performances from Jasprit Bumrah and Ravichandran Ashwin as well backed by Ravindra Jadeja’s all-round show and the impressive entry of debutants Shubman Gill and Mohammed Siraj.