Kohli most important man in Indian cricket will listen to him: Ganguly

Former India skipper Sourav Ganguly was officially appointed as President of the Board of Control for Cricket in India (BCCI) at the Annual General Body Meeting in Mumbai on Wednesday. Ganguly becomes the 39th president of BCCI, and his term will last nine months for now.

Speaking to the media after taking over the post, Ganguly said that it was an honor to take over the role. He added one of his main aims to be to bring credibility back in the set-up. “I find myself in a position where I can make a change and it’s a challenge. No compromise on credibility, corruption-free and same for all BCCI, just as I led India,” Ganguly promised. 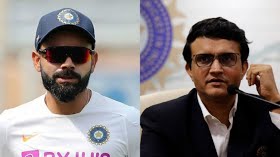 The man fondly referred to as Dada was also asked about Mahendra Singh Dhoni, whose future has been a matter of much debate since India’s World Cup 2019 exit. “Champions don’t finish very quickly. Till I am around, everybody will be respected,” the man, who led India out of turmoil from the 2000 match-fixing scandal, went on to say.

Ganguly, who was involved in a bitter spat with Ravi Shastri during the selection process for India’s coach, added that he will have a frank discussion with the head coach as well, all for the betterment of Indian cricket.

“It will be a proper discussion and everything will be mutually discussed but be rest assured, we are here to make their life easier, not make their life difficult. Everything is on the basis of performance,” he further said.

At the press conference, Ganguly was seen with the blazer that he wore as India captain. “I got this when I was the Captain of India. So, I decided to wear it today. But, I didn’t realize it’s so loose,” Ganguly said in a light-hearted manner.

Ganguly takes over as BCCI chief at a time when the reputation of the cricketing body has taken a big hit in the wake of controversies and corruption-related issues.