India put up an excellent bowling and fielding effort in the big game against Pakistan on Saturday at Dhaka to claim another T20 victory over Pakistan, by five wickets

India put up an excellent bowling and fielding effort in the big game against Pakistan on Saturday at Dhaka to claim another T20 victory over Pakistan, by five wickets. Having won the toss, India were all over the Pakistan right from the start, and the latter team just could not get into any side of rhythm. On a surface that had a lot of grass and, consequently, plenty of bounce Pakistan were kept down to merely 83 in 17.3 overs. Pakistan then fought back spectacularly courtesy Mohamamd Amir, who got three big wickets early with fast swinging deliveries, some of which were unplayable. But, Virat Kohli displayed his quality with some trademark drives and punches.

Kohli came in with India having lost Rohit Sharma in the first over, and soon saw the team crumble to 8 for 3. He hung around early when the ball was playing tricks, but opened up, being especially severe on Wahab Riaz, to reach 49 in rather untroubled manner. Kohli was unlucky not to reach a fifty as he was given lbw to Mohammad Sami even though he got an inside edge. Kohli featured in a 68-run partnership with Yuvraj Singh, who struggled to time the ball again, but significantly hung around for his unbeaten 14 from 32 balls. Hardik Pandya went early, but MS Dhoni came in and hit the winning runs. 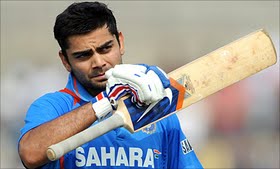 Amir was unlucky as a toe-crushing yorker which trapped Rohit Sharma plumb in front was given not out, first ball. But, Rohit went next ball in the same mode, this the ball pitching on a good length, and bending back in. Even a spectacularly in-form Rohit was beaten for pace. Ajinkya Rahane, who was brought in for the injured Shikhar Dhawan, got a similarly unplayable delivery, and could not get bat to one that pitched on middle and beat his defence. It was a sensational first over by Amir. He returned to dismiss Suresh Raina, who chipped on straight up in the air, and was caught at mid-on. At 8 for 3, the match was well and alive. But, Kohli settled the nerves for India.

Earlier, Mohammad Hafeez began the Pakistan innings with a crisp square drive second-ball, but was caught behind off Ashish Nehra a couple of balls later, as the ball rose higher than the opener anticipated, and Hafeez couldn’t time it. Jasprit Bumrah got another early wicket as Sharjeel Khan cut one that also rose high on him. The edge flew quickly to Ajinkya Rahane at wide first slip. The first of the two run outs came in the sixth over when Shoaib Malik pushed one into the covers, and the non-striker Khurram Manzoor set off. Malik sent him back, and Manzoor was caught short by a direct hit from Kohli.

Manzoor’s struggles (10 from 18) typified Pakistan’s batting. Malik clearly seemed ruffled by the dismissal and went back in the next over, caught behind off Pandya, playing a loose drive away from the body. Yuvraj joined the wicket-taking act first-ball as he trapped Umar Akmal lbw with one that skidded on. Another big moment came when Shahid Afridi ran himself out for 2, going for a non-existent second, and failing to beat Ravindra Jadeja’s throw from midwicket. Afridi’s departure left Pakistan reeling at 42 for 6. Sarfraz hung around patiently, before Jadeja and Pandya finished them off. Except Ravichandran Ashwin, all the Indian bowlers were among the wickets, which points to a brilliant all-round bowling effort.