CSK Vs RCB: Jadeja was amazingly calm under pressure

Till now, Ravindra Jadeja was jokingly referred to as Sir Ravindra Jadeja in social networking cycles. But, after his excellent cameo under pressure against Royal Challengers Bangalore at Chepauk on Saturday

Till now, Ravindra Jadeja was jokingly referred to as Sir Ravindra Jadeja in social networking cycles. But, after his excellent cameo under pressure against Royal Challengers Bangalore at Chepauk on Saturday, he may be taken a bit more seriously by cricketing folks. In yet another game that went all the way to the wire, Jadeja kept his cool exceptionally well under pressure. Although it must be said that RP Singh helped Chennai’s cause by bowling a poor last over, the no ball he bowled off the last delivery was unacceptable, Jadeja’s innings was still superb under pressure.

In spite of getting off to a poor start chasing a challenging target, what Chennai did very well throughout their innings was stay in hunt by building crucial partnerships one after the other. After Michael Hussey and Murali Vijay fell early, Suresh Raina and Subramaniam Badrinath featured in a steadying partnership whilst also ensuring that the run rate never slipped out of hand. Just when it looked that their alliance was taking control of the chase, both fell in quick succession to bring Bangalore right back into the contest, Syed Mohammad did very well to get rid of both. 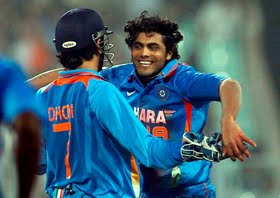 The loss of Raina and Badrinath was, however, followed by the decisive partnership of the match. Skipper M S Dhoni and left-hander Jadeja featured in the alliance that took Chennai closer to victory. Dhoni played a typically smart innings, mixing good running between the wickets with some big hits. But, when Dhoni fell with a few more runs still to get and not too many overs left, it seemed that the game was out of Chennai’s grasp. This is where Jadeja’s brilliance came to the fore. The four and six he hit in the last over swung the game in Chennai’s favour before RP Singh’s last-ball blunder handed over the match to the hosts. In the context of the game, Dwayne Bravo’s six in the penultimate over was extremely crucial.

Although Bangalore ended up with a competitive total, the early loss of Chris Gayle without doubt cost them a few important runs, which also made a difference in the end. Another failure by Mayank Agarwal did not help their cause, but captain Virat Kohli and AB de Villiers did exceedingly well to bring the side back on track. The South African was particularly brilliant as he managed to maintain a strike rate of 200 during his half century. Kohli was slightly more sedate, but he played according to the situation.

A couple of quick wickets towards the end stifled the innings to an extent. Bangalore also fought back well with the ball, Ravi Rampaul in particular, was standout with his three wickets. Syed Mohammad’s twin strikes then gave the visitors a very good chance of clinching the clash. The foursome of Raina, Badrinath, Dhoni and Jadeja though managed to keep Bangalore’s bowlers at bay. In the end, they had enough skill to get home under pressure.

Turning point of the game: The very last ball – RP Singh’s no-ball, which let Jadeja hit the winning runs in spite of getting caught.