England fast bowler James Anderson has been in terrific form over the last few years. In the current series against Sri Lanka, he has been the bowler of the match on both occasions. Here’s a look at five of his impressive performances since July 2013

England fast bowler James Anderson has been in terrific form over the last few years. In the current series against Sri Lanka, he has been the bowler of the match on both occasions. Here’s a look at five of his impressive performances since July 2013. 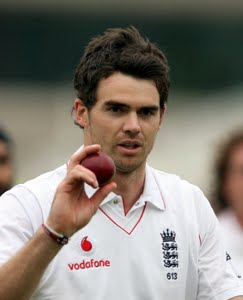 5 for 85 and 5 for 73 against Australia at Trent Bridge in July 2013: This was a closely contested tussle that England ended up winning by 14 runs. James Anderson was the star, claiming five wickets in each innings, to finish with 10 for the match. In the first innings, he dismissed Chris Rogers, Michael Clarke, Steven Smith and a couple from the tail. This was the match in which Ashton Agar made a historic debut, scoring 98 on debut at number 11. However, Anderson ensured Agar’s heroics were in vain, playing a stellar role in keeping Australia down to 296 in their chase of 311. His scalp included the famous last dismissal of Brad Haddin, caught behind for 71.

3 for 93 and 4 for 25 against Sri Lanka at Lord’s in June 2014: In a match dominated by batsmen, Anderson again stood out with his skill. For England, Joe Root made an unbeaten 200 in the match and Gary Ballance made a hundred. While for Sri Lanka, Kumar Sangakkara and skipper Angelo Mathews chipped in with hundreds. Anderson toiled for his three-for in the first innings, and was rewarded with the scalps of Kaushal Silva and Lahiru Thirimanne. But, it was in the second innings that he ripped apart the Lankans, claiming half-centurion Sangakkara, and then adding the scalps of Mahela Jayawardene, Thirimanne and Mathews. Sri Lanka were nine wickets down, and somehow hung on for a draw.

6 for 42 against West Indies at Bridgetown in May 2015: This effort came in a losing cause, but was a commendable one nonetheless. Having been bowled out for 257 despite an Alastair Cook hundred, England hit back courtesy Anderson to restrict West Indies to 189. Anderson sent back the openers Kraigg Brathwaite and Shai Hope cheaply before adding the scalps of Marlon Samuels and Jermaine Blackwood. England’s second-innings collapse however saw West Indies cruise to a rare five-wicket win.

5 for 16 and 5 for 29 against Sri Lanka at Leeds in May 2016: In the first Test of the series, Anderson completely blew the Lankans away. His first-innings five-for gunned Sri Lanka down for 91. Silva and Mathews were among his big scalps. There was no reprieve for the visitors when they followed on. Anderson picked out the top three, and added a couple from the tail to finish off the formalities, as England registered a massive innings and 88-run triumph.

3 for 36 and 5 for 58 against Sri Lanka at Durham in May 2016: Action was in repeat mode as England faced Lanka in the second Test. Having posted a huge score, England kept Lanka down to 101, Anderson dismissing Karunaratne, Chandimal and Thirimanne. Sri Lanka were resolute in their second innings as they posted 475. But, Anderson continued to toil, and was rewarded with 5 for 58, superb figures as the others struggled. He was man of the match as England won by nine wickets.