Australia vs South Africa: A fitting finale in store at Cape Town

On current form Australia and South Africa are the two best Test sides in the world. And, the manner in which the two Tests have panned out is proof of the same.

On current form Australia and South Africa are the two best Test sides in the world. And, the manner in which the two Tests have panned out is proof of the same. At Centurion, Australia continued in the same vein where they left off against England in the Ashes. Mitchell Johnson bowled as if he could still see the English batsmen in Graeme Smith and co, and was ferocious in his demolition of the hosts. Just when one wondered whether South Africa were good enough with Jacques Kallis gone, the Proteas hit back hard, and stung the Aussies; Dale Steyn demonstrating why he is the best fast bowler in the world with a superb demolition job. 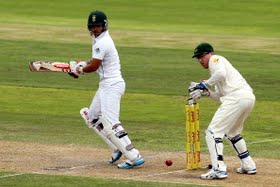 Although South Africa will take the momentum into Cape Town, Australia would believe that they will be competing in the Test on an even keel. Two factors could play a major role in determining the result of the mouth-watering final Test – one, how South Africa handle the pace of Mitchell Johnson and two, how Australia deal with the intensity of Dale Steyn. After all, cricket may be a team game, but as seen numerous times in the past, when a fast bowler runs riot, he can very well turn the match on its head. Both South Africa and Australia would be wary of this common factor.

After an impressive show at Centurion, Australia’s batting was a major letdown at Port Elizabeth. Apart from David Warner in both innings and a Chris Rogers century, the visitors had nothing to show in terms of resistance to Steyn and co. Their batting collapse in the fourth innings, when they inexplicably lost ten wickets in one session was more Pakistan-like. A number of their middle and lower order batsmen have failed to get among the runs, which is one of the reasons they struggled at Port Elizabeth.

Warner apart, all the other Aussie batsmen have been inconsistent. Shaun Marsh began with a hard-fought century at Centurion, but followed the same with a pair at Port Elizabeth. Skipper Michael Clarke is yet to register a half-century in the series. With the series on the line, and too against the number one Test team, Clarke would be raring to stand up and deliver. Brad Haddin hasn’t been able to replicate his Ashes success with the bat, and that has hurt the team in no uncertain terms. Meanwhile, Steven Smith, who began the series with a ton, will also be keen to deliver under pressure.

South Africa, on the other hand, did most things right at Port Elizabeth. Among the batsmen, AB de Villiers, JP Duminy and Hashim Amla all registered memorable centuries even as opener Dean Elgar got a bright 83. If only skipper Graeme Smith can get among the runs, South Africa would become an even more formidable batting outfit. Bowling wise, Steyn would be expected to lead the pack again, but in Morkel, Philander and Parnell, they have pacemen who are themselves capable of striking the big blows. On current form, South Africa are slight favourites, but it won’t take a lot for that to change.