AUS vs IND 2nd T20 report: India continued their domination over a weakened Australia as they thrashed the hosts by 27 runs at Melbourne on Friday to clinch the T20 series with a match in hand.

India continued their domination over a weakened Australia as they thrashed the hosts by 27 runs at Melbourne on Friday to clinch the T20 series with a match in hand. Chasing an imposing 184, 157 was what the hosts managed at the end of their innings despite, at one stage, being in an excellent position to chase down the total. The Indian bowling again came into its own in the second half as Australia faltered under the pressure of a huge total. This was after Virat Kohli came up with another rollicking unbeaten fifty. Kohli's task was made easier by a smashing opening partnership between Shikhar Dhawan and Rohit Sharma, who combined to blast 97 in 11 overs when Dhawan was dismissed. 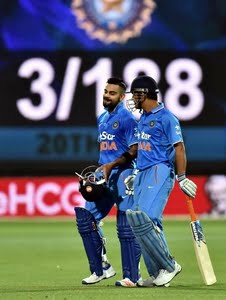 For the second match in a row, Australia faltered after being in an excellent position to chase down India's total. It was as if the teams had exchanged roles following the ODI series. And so, the Aussies, who had raced to 94 in the 10th over, ended up getting just 157. This even after the Indians dropped three catches, and MS Dhoni missed the easiest of stumpings in the first half of Australia's chase. But, they recovered well enough and, once the opening partnership was broken, the Indian bowlers took control, putting the inexperienced Aussies under pressure. If Australia dominated the first ten overs, India were clearly well ahead in the second phase.

After a terrific start, the downfall for Australia began as Marsh failed to time a shot from Ravichandran Ashwin, and ended up giving a catch for a run-a-ball 23. They were no repeats of Big Bash heroics from Chris Lynn as Hardik Pandya had him caught behind. Yuvraj Singh made his first significant contribution of the series. He had the big hitting Glenn Maxwell stumped by sending one quick and wide, one on which Maxwell failed to put bat on ball. The match really though turned with the wicket of Shane Watson. He hit one hard, straight down the ground, only for Ravindra Jadeja to get both hands to it, and leave Watson in awe.

All this while, skipper Aaron Finch was leading from the front, blasting the bowlers all over the park. He raced to 74, but a hamstring issue and lack of support from the others brought to an end his valiant innings. Finch tested his hamstring and tried to pinch a quick single, but failed and was run out by Jadeja even as the throw was wide. The lower order failed to offer any kind of assistance as the run rate climbed to unattainable heights. It was a good all-round effort by the Indian bowlers as almost all of them chipped in with wickets and kept the Aussies under check once the got the early breakthroughs.

India's batting effort too was of the top order in literal sense. After being inserted into bat, Dhawan and Rohit came out all guns blazing. Dhawan was the early aggressor with hits all round the ground, and Rohit joined him soon enough. Dhawan was looking set for a quick fifty when he top edged a reverse sweep off Maxwell for 42. Kohli joined Rohit and the two took the innings ahead from that point never looking in trouble. That was until Rohit was run out for 60 following another mix-up with Kohli. The Indian Test and T20 skipper, MS Dhoni, then joined hands as India finished on a high. For a second game it a row, their batting was too good for Australia.