England arrived in India under immense pressure. Not only had they drawn the Test series in Bangladesh, but had also failed to register a Test victory over the unpredictable Pakistan at home

England arrived in India under immense pressure. Not only had they drawn the Test series in Bangladesh, but had also failed to register a Test victory over the unpredictable Pakistan at home. India, on the other hand, were at their rampant best having thrashed South Africa and New Zealand at home, and West Indies and Sri Lanka away. As such, England had a rather unenviable task when they headed into Rajkot. But, the way they performed in the first Test, where they dominated India, raised hopes of a close series. Cut to Chennai, England are 3-0 down and would be feeling rather homesick, following the recurring struggle.

James Anderson made news in the last Test, over his critical observations of Indian skipper Virat Kohli's stupendous batting form, which did not go down well with many, including a few past cricketers from England as well. On the eve of the Chennai, he remained in the headlines, but for different reasons. Confirmed reports state that he has been ruled out of the fifth and final Test due to body soreness. It is a blow for England for sure, but he hasn't really done anything spectacular on the tour, so there is reason to believe England wouldn't be missing much. 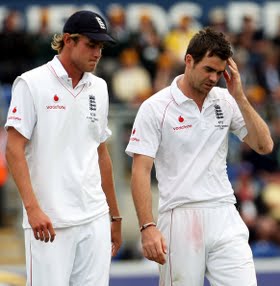 Primarily, it has been England's batting that has let them down in big way in the series. It is too late in the day to make amends, but the Englishmen would like to end the series on a high. Alastair Cook, in particular, has been most disappointing. He began the series on an impressive note, in sync with his great record against India irrespective of the venue. But since, he has been reduced to a Ravichandran Ashwin bunny. The England skipper would know he is better than that. Joe Root, the other big batsman, has been fluent, but has failed to get the big scores. Moeen Ali too has faded away after a perfect start.

India have everything going for them. Their skipper Virat Kohli is in the form of his life. Of course, we have been saying that for a while now, but he only seems to get better with each game. Murali Vijay brought his form back on track after a couple of poor Tests. The Indian lower order has been brilliant with Ashwin and Ravindra Jadeja contributing crucial runs. And the emergence of Jayant Yadav, who has tasted unexpected success with the bat, including a hundred in the previous game, has been a big bonus. What India need now in the batting department is runs from Lokesh Rahul at the top, and newcomer Karun Nair in the middle. The latter has seemed nervous for sure.

In the bowling, India have tasted success on expected lines with Ashwin running through the England line-up on more occasions than one. In the previous Test, even though Kohli was the man of the match, Ashwin played a stellar role claiming a haul of 12 wickets. The desired support came from Jadeja while Yadav was once again the unsung hero, striking at crucial moments. Ishant Sharma will be available for the last Test following his wedding, but with Bhuvneshwar Kumar having done reasonably well, India will not be keen to disturb the winning combination. The pitch is a worry as it has been battered by the cyclone. Whether the surface will still play true to its nature remains to be seen.