The legend of tonight's game goes that when Sir Ravindra Jadeja got caught at thirdman with two runs needed to win off the last ball in an IPL match, it wasn’t given out but declared as a noball with the bowler RP Singh overstepping the crease.

Hosts Chennai Super Kings pulled off a lucky last ball win over Royal Challengers Bangalore at Chepauk tonight. The legend of tonight's game goes that when Sir Ravindra Jadeja got caught at thirdman with two runs needed to win off the last ball in an IPL match, it wasn’t given out but declared as a noball with the bowler RP Singh overstepping the crease. Jadeja could have so easily turned out from a hero to a villain in one over. CSK needing 16 to win from the final over was favourities to win as Jadeja hit the first ball for a fluke boundary with a thick edge but then followed it up with a clean hit for a six over long on. When he got strike again in the final ball, two runs were needed and he was almost a villain getting caught but lady luck was with him as the bowler RP Singh had bowled a noball.

It was going to be a tight finish as RCB had posted a competitive total of 166 on a pitch that was slightly on the slower side. Chris Gayle flopped this time, caught behind by a diving Dhoni after chasing a widish away swinger. RCB then went steadily and picked up momentum through the knocks from Skipper Virat Kohli (58 from 47 balls with 2 fours and 2 sixes) and AB de Villiers (64 from 32 balls with 8 fours and a six). CSK could restrict RCB to a few runs lesser than what they could get by keeping AB de Villiers off the strike in the final overs.

In their run chase of 166, CSK was pushed on the backfoot at 10 for 2 in 4 overs. Suresh Raina provided the impetus to the chase early on with his 22-ball 30 while Badrinath laid the foundation with a 29-ball 34. At 78 for 4 in the 13th over, CSK was dependent on their Skipper MS Dhoni to take them to the finishing line. Dhoni wasted little time scoring 33 from 23 balls with a four and 2 sixes before falling at a crucial time of the match, edging a big shot off Rampaul to the keeper. 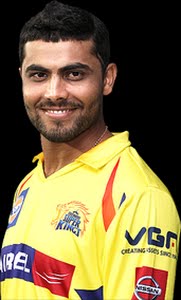 After Dhoni’s exit, Dwayne Bravo pulled Rampaul for a big six in the penultimate over but was lbw to the same bowler to leave CSK needing 20 to score from 8 balls. Chris Morris with 7* from 4 balls supported Jadeja (38* from 20 balls with 3 fours and a six) to finish the match in favour of the homeside.

Toss and Teams: Chennai Super Kings have won the toss and asked RCB to bat first at the MA Chidambaram Stadium in Chepauk. Ravi Rampaul, the West Indian fast bowler gets his first game and he replaces Muralitharan in the RCB XI.