England skipper Alastair Cook not only wrote his name into the record books with his 23rd Test century, the most by an Englishman, but piled on the agony for India, registering his third ton in succession in this series. 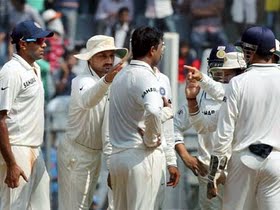 England skipper Alastair Cook not only wrote his name into the record books with his 23rd Test century, the most by an Englishman, but piled on the agony for India, registering his third ton in succession in this series. Post the first innings at Motera, India just haven’t been able to overcome the Cook challenge. His latest knock has only made things ominous for India. Following the latest ton, he now has five hundreds against India in 14 Tests. He has amassed 1368 runs against the Indians so far at a stupendous average of 62.18 and a highest of 294, which could be surpassed with Cook continues in the same vein.

Indians have traditionally struggled against left-handers in all conditions, and Cook is the latest visiting batsmen to have tasted such marvelous success in India. Here’s a look at some of the others:

Matthew Hayden: It was in India that Hayden resurrected his sinking career during the memorable 2001 series. In three Tests during that series, he amassed 549 runs with two hundreds, a highest of 203 and an unbelievable average of 109.80. Despite less success on his next two visits to India, Hayden’s record in India remained impressive. He featured in a total of 11 Tests, scoring 1027 runs at an average of 51.35. He was clearly a thorn in the Indian side.

Shivnarine Chanderpaul: This ungainly looking left-hander tasted success against India in all formats under all conditions. His record in India speaks for itself. He played six Tests in India and notched up 491 runs at an excellent average of 54.55. These runs comprised two tons and a highest score of 140. Over the years, Chanderpaul has hardly looked in any trouble when facing the Indian bowlers even in the spin-friendly sub-continental conditions.

Andy Flower: He was the epitome of succeeding against India in India. It was only thanks to Flower than Zimbabwe managed to put up impressive shows during their India visits. He played five Tests in India and amassed as many as 820 runs in those games. This included three hundreds and a highest of 232 not out. Not surprisingly, Flower averaged an unprecedented an 117.14 in those five games. On his very first trip to India in 1993, he scored a century and a half-century in the only Test played at the Feroz Shah Kotla, Delhi.

Jimmy Adams: This unassuming left-hander had a pretty average Test career, but during West Indies’ visit to India in 1994, his performance was nothing short of sensational. Adams notched up 520 runs in three Tests with two hundreds and a highest of 174 not out. Adams’ average in the series was next to unbelievable –173.33. His defence even using the pad was so solid that he was given the nickname Padams. Not surprisingly, the left-hander never tasted any success of that kind against any other opponent.