IPL 8 32nd T20 MI vs RR Preview, Live Score: Mumbai Indians and Rajasthan Royals will battle it out for supremacy when the teams meet for the second time this season at the Wankhede Stadium in Mumbai on Friday night.

Mumbai Indians and Rajasthan Royals will battle it out for supremacy when the teams meet for the second time this season at the Wankhede Stadium in Mumbai on Friday night. Things have changed dramatically since the last encounter between the teams although the positions in the points table have only been modified marginally. Mumbai were easily beaten by a then rampant Royals a couple of weeks back, but have had an elongated break following the win against Sunrisers Hyderabad last week. Rajasthan, on the other hand, were frustrated by another washout against Royal Challengers Banglaore at Chinnaswamy Stadium. 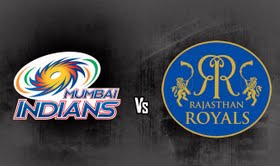 Although Rajasthan are still comfortably placed to make it to the play-offs, they would be definitely disappointed with how things have panned out for them since the Super Over defeat to Kings XI Punjab. Their match against Kolkata Knight Riders was abandoned without a ball being bowled, which was followed by the recent encounter against RCB that was also abandoned due to rain. Rajasthan would be a bit rusty owing to these developments. The rain- marred matches have meant that their batsmen haven’t had a hit out in the middle for nearly a week now. This is where Mumbai will look to outdo Rajasthan.

Mumbai will be pleased with their recent form as they successfully got the better of Hyderabad defending a mediocre total. Their bowling was particularly impressive, with Sri Lankan veteran Lasith Malinga leading the way. New Zealand all-rounder Mitchell McClenaghan has also filled in well for the injured Corey Anderson. Harbhajan Singh has brought all his experience into play, and has been among the wickets apart from keeping the runs down. But, they have struggled because the likes of R Vinay Kumar, Pawan Suyal and Jasprit Bhumrah have failed to make much of an impact.

Their batting is a worry for sure. The opening combination still looks unsettled. Parthiv Patel hasn’t fired even as Lendl Simmons has grabbed his opportunity. Skipper Rohit Sharma has moved down the order to provide stability to the middle order, but the move hasn’t been working. Mumbai might experiment with getting him back at the top. With Corey Anderson out, there will be additional responsibility on Kieron Pollard to deliver the big blows. In fact, the batting outfit as a whole will need to show significant improvements in their performance.

With the game being played in Mumbai, rain can be ruled out of the equation unless of course bad luck follows Rajasthan. Interestingly, the visitors have a number of players who are actually from Mumbai, and thus would be keen to make an impact on their ‘home’ ground. The list included the in-form Ajinkya Rahane, leggie Pravin Tambe and pace bowler Dhawal Kulkarni. Rajasthan’s batting is in good shape with Shane Watson and Steven Smith among the runs. Their bowling needs to pull its socks up. Having said that, if Rajasthan perform to potential, things should fall into place.