The Indian Premier League (IPL) 2020 auction is all set to be held in Kolkata on December 19. There is undoubted excitement in the air as franchises prepare their auction plan

The Indian Premier League (IPL) 2020 auction is all set to be held in Kolkata on December 19. There is undoubted excitement in the air as franchises prepare their auction plan. This year’s auction could be high-volatile as many players are competing for a few spots.

Among the players who have put up their name for the auction, seven (all overseas) enter the bidding war at a base price of Rs 2 crore. They seven players are Pat Cummins, Chris Lynn, Glenn Maxwell, Dale Steyn, Mitchell Marsh, Angelo Mathews and Josh Hazlewood.

Robin Uthappa, Eoin Morgan, Jason Roy, Chris Woakes and Chris Morris have placed their names in the Rs. 1.5 crore bracket. Among other Indians, Piyush Chawla, Yusuf Pathan and Jaydev Unadkat are in the base price of Rs. 1 crore. 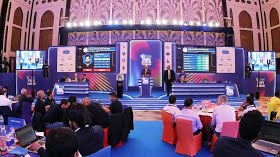 Here’s all you need to know about IPL 2020 auction

What is the date and timing of the auction?

Where is the IPL auction being held this time?

The IPL auction will take place in Kolkata. This is for the first time Kolkata will be playing host to the auction.

Where can I watch the IPL auction?

The IPL 2020 auction will be telecast live on the Star Sports Network.

How many players will go under the hammer?

A total of 971 players had put up their names for the auction, out of which 332 have been shortlisted. Of them, 186 are Indian, 143 foreigners, and three from associate nations.

How many slots are available?

A total of only 73 spots are up for grabs at the auction.

Who will IPL auctioneer this time?

Hugh Edmeades, who was the auctioneer during last IPL auction, will continue in the role this year as well.