India clinched a narrow 1-run win over Proteas in the final Super Eights match at Colombo but couldn’t make it to the Semi Finals. Pakistan instead have moved into the Semi Finals ahead of India and will take on Sri Lanka.

India clinched a narrow 1-run win over Proteas in the final Super Eights match at Colombo but couldn’t make it to the Semi Finals. Pakistan instead have moved into the Semi Finals ahead of India and will take on Sri Lanka. Australia will meet West Indies in the second Semi Final.

The Men in Blue needed to keep South Africa below 121 to get ahead of Pakistan on the net run rate. Things were looking pretty good when India had reduced SA to 46 for 3 in 6.1 overs when Skipper AB de Villiers played onto his stumps off Yuvraj Singh. However, India’s chances were quickly fading away because of a superb innings from Faf du Plessis, who got 65 (from 38 balls with 6 fours and 2 sixes). 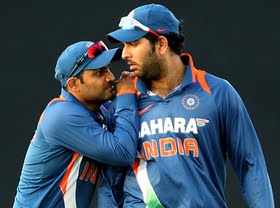 India couldn’t keep the Proteas below 121 but could end up on the winning side by just the one run after quite some drama in the final overs. Balaji with 3 for 37 and Zaheer Khan with 3 for 22 helped India to the victory. The Man of the Match award though went for Yuvraj Singh who followed his 15-ball 21 with good figures of 4-0-23-2.

India Innings: South Africa need 153 runs to win from 20 Overs in the Super Eights Match against India. For India to qualify for the Semi Finals they need to win this match by atleast 31 runs. It was a fine total to end with for India as they found themselves under immense pressure at 36 for 3 in the 6th over and later on at 68 for 4 in 10 overs.

Suresh Raina held the innings together with an unbeaten 45 (from 34 balls with 5 fours). MS Dhoni played a crucial cameo in the end scoring 23* (from 13 balls with 3 fours).

Toss and Teams: South Africa who are out of the tournament following Pakistan’s victory have won the toss and asked India to bat first in the final Super Eights game at Colombo. India now that they are going to bat first have to win this match by atleast a margin of 31 runs to make it to the Semi Finals.