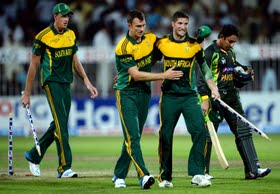 Pitch report :At the moment we have tried different players in our order but the problem is that the guys who are good batsmen can't bowl as a fully-fledged bowling option, and if we pick the bowlers who are really good in bowling then we lack batting. We are really missing a quality allrounder who can deliver in bowling and batting in pressure situations.

With the result of the series already determined, the fifth ODI could fade into obscurity. However, it serves as the precursor to the return series in South Africa, which will begin later this month. If South Africa manage to win, they will take bragging rights into the three-match affair at home, but if Pakistan can pull one back, it could give them some much-needed buoyancy. The conditions, of course, will be completely different to Cape Town, Port Elizabeth or Centurion, but it could still act as some sort of prologue. The Sharjah strip was the most spinner friendly and will be more testing for the batsmen than Abu Dhabi's pitch was. It should favour Pakistan, but with the slew of problems facing them, they will go into the fixture needing motivation. On the eve of the game, news broke that Pakistan coach Dav Whatmore's contract will not be renewed. While that may not be unexpected, it has left him with something to prove in the time he has left in charge. If he can fix Pakistan's weak batting line-up, it will be the best parting gift he can give them. South Africa have made incremental improvements, which is promising for their coach Russell Domingo. He still has work to do with the top order and will want to use this game to start fine tuning as South Africa look to find a settled combination as they build towards the World Cup.

AB de Villiers said South Africa always felt they were in with a chance against Pakistan's middle-order batsmen, who will feel obliged to end the series on a positive note. Umar Amin, Umar Akmal, Asad Shafiq and Shahid Afridi have scored a combined total of 168 runs in 12 innings against South Africa, and not a single half-century between them. He could end up being the overall leading wicket-taker in the series, so Imran Tahir will want to put in a strong final effort to cap a period during which he has impressed beyond expectation. He has proved wily with variations, and has done a good job of cleaning up the tail, but he has threatened to go for more runs in every game. He's still brimming with confidence, but will need to add more control to his bowling to end on a high.

With the series wrapped up, South Africa may experiment, although they will limit it to the bowling department. Vernon Philander, who was included after much public pressure, is yet to get a game and may come in along with either Wayne Parnell or even Robin Peterson, who has also carried drinks since being dropped after the Abu Dhabi Test. Morne Morkel and Lonwabo Tsotsobe may get a rest.

South Africa WWLWL
Match Stats :
Pakistan have been bowled out in all four matches in this series, while South Africa have been dismissed just twice. South Africa also have the only centurion of the series - Quinton de Kock.
The top three wicket-takers in this series so far have been spinners, with Imran Tahir leading the charts. He has nine scalps, while Saeed Ajmal and Shahid Afridi have eight each.