Windies 34-1 at stumps after bowling out India for 246

On Day 1 of the the first Test between the visiting Indian side and hosts West Indies, the latter were trailing by 212 runs with 9 wickets in hand.

On Day 1 of the the first Test between the visiting Indian side and hosts West Indies, the latter were trailing by 212 runs with 9 wickets in hand. The Windies had reached 34/1 at stumps after bowling out India for 246. Earlier in the day, The hosts had India on the mat at 85/6, before Suresh Raina (82) and Harbhajan Singh (70) staged a recovery. The duo put on 146 for the seventh wicket, while the West Indies' Fidel Edwards took 4/56, with Ravi Rampaul and Devendra Bishoo ensnaring three wickets a piece. 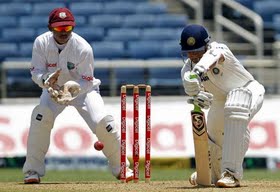 After a dramatic first session of play wherein the West Indies had reduced India to a precarious 69/4, the Indian slide continued post lunch. In the 26th over, Rahul Dravid tried to up the ante by smashing Devendra Bishoo for two back-to-back fours. But then the leg-break foxed the batsman with a flighted delivery which he wound up edging to first slip. India were 83/5 and one-and-a-half over later, were 85/6, when M S Dhoni lobbed a pitched up delivery from Bishoo to gully.

New batsman Harbhajan Singh, counter-attacked by smacking the same bowler for two consecutive boundaries in the 31st over. Bhajji then ran three to bring up India's 100. The momentum, began to swing towards India, when Suresh Raina clobbered Bishoo for two fours, after which Bhajji hammered Ravi Rampaul for three boundaries in the 34th over. Raina followed suit, by dispatching Bishoo to the fence twice in the next over and India were already 141/6 in 35 overs.

In the 39th over, Harbhajan took India past 150 by striking Sammy for two fours. Raina and Bhajji were in control now, settling into a steady partnership and knocking off runs at a fairly brisk rate. In the 52nd over, India had crossed 200, with the batting duo both registering fifties en route. In a bumper 53rd over, Raina knocked off two fours off Bishoo while Harbhajan smashed him for a six.

Finally in the 57th over, Bhajji's quick-fire innings was brought to an end by Edwards when the pacer had him caught at deep square leg, for 70 off 74 balls. India were 231/7 with the tail exposed. It was not long before the visitors folded. Edwards trapped Praveen Kumar in front for 4 in the 59th over, before the same bowler had Amit Mishra caught at slip for 6 and Rampaul followed up with the all-important wicket of Raina, for 82 off 115 balls. India were thus all out for 246 in 61.2 overs.

In their reply, the Windies got off to an ultra-cautious start with Lendl Simmons and Adrian Barath showing no aggressive intent. The move didn't quite work as anyway, Ishant Sharam got the opening breakthrough when he had Simmons caught at short-leg for 3 off 23 balls. The hosts were 18/1 in 9.4 overs. Then Barath and Ramnaresh Sarwan played out the last 10 overs of the day carefully, taking their side to 34/1.