Australia will go into the second Test against South Africa with more hope and less confidence as they look to fight back after yet another poor performance at Perth. The Aussies lost the first Test of a home series after a very long time when they went down at Perth

Australia will go into the second Test against South Africa with more hope and less confidence as they look to fight back after yet another poor performance at Perth. The Aussies lost the first Test of a home series after a very long time when they went down at Perth. It was their fourth successive Test loss in a row after being whitewashed 3-0 in Sri Lanka. The problem for the Aussies at Hobart would be that they just do not have to battle the opponents, but weather as well, since a lot of rain is expected at least on the first couple of days. Steven Smith and co must lift their game significantly to make a mark at Hobart, weather permitting.

For South Africa, if one takes away the first day's performance, it was a perfect effort at Perth. With Dale Steyn finding himself on the wrong side of the field yet again, Kagiso Rabada lifted his game to bowl South Africa to a famous win. In both innings, he was highly impressive, but his five-for on the final day, was an exceptional effort especially under the conditions in which it was registered. Australia were fighting hard, and it needed a special effort from Rabada to break the resistance. For someone still so young in his international career, the pacer is already beginning to make an impression as a match-winner.

South Africa will take plenty of positives into the Hobart match. The hundred from JP Duminy was a massive gain considering the pressure he was under to keep his Test career on track. Eight years since his sensational debut against the same opponent, Duminy has struggled to replicate the success in the five-day arena. Many had even thought his Test career was finished. But, the Perth hundred will undoubtedly give a new lease of life to his Test career. Dean Elgar also batted superbly for his ton while Temba Bavuma contributed with both bat and in the field. Quinton de Kock too got runs.

In an ironic sense, the biggest gain for the Proteas was that Hashim Amla scored only one. Amla would be itching to get a big one. Faf du Plessis, who is leading in AB de Villiers' absence is also going through a rich vein of form. Although, the visitors did not miss Steyn too much in the previous match, the absence of both him and de Villiers from the playing eleven definitely could make a difference. In Steyn's absence, either Morne Morkel or Kyle Abbott could come back into the side. Vernon Philander and debutant Keshav Maharaj both played their part at Perth so that would please the South Africans. 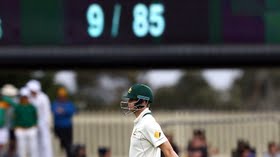 Australia primarily lost because their batters capitulated in unexpected fashion, after having the opposition on their knees. Except for David Warner and Shaun Marsh in the first innings and Usman Khawaja and Peter Nevill in the second, no one really stood up to the task. Marsh as well as Peter Siddle have been ruled out with injury. So that would mean Australia will again have to fiddle with their opening combination, Joe Burns returning in place of Marsh and Joe Mennie for Siddle. Pressure is growing on Steven Smith to deliver as leader and player, as also on Adam Voges and Mitchell Marsh. The Aussies need to get their house in order, and hope rain doesn't play spoilsport.