World Cup 2019: No favorites as India-Australia face off in Super Sunday clash

Defending champions Australia and two-time winners India will take on each other in one of the biggest contests of World Cup 2019.

Defending champions Australia and two-time winners India will take on each other in one of the biggest contests of World Cup 2019. The 14th match of the World Cup, it will be played at The Oval in London.

Both India and Australia will go into the match high on confidence, having tasted victories in their recent matches. While India was quite clinical in their triumph over South Africa, Australia came back from a precarious 79 for 5 to clinch a 15-run victory over West Indies.

Post the match, Nathan Coulter-Nile, who blasted 92 from merely 60 balls was candid enough to admit that his match-winning knock does not guarantee him a place in the playing eleven as he is in the team primarily as a bowler and hadn't picked up any wickets. It remains to be seen whether his prediction turns out to be true. 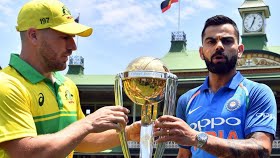 Australia will be pleased with the way things have progressed so far. David Warner and Aaron Finch were among the runs against Afghanistan while Steve Smith stood up for the team under dire straits versus West Indies. Alex Carey too made an impression under tense circumstances. With the ball, Mitchell Starc's five-for was the big plus, proving he is still a match-winner with the ball.

India goes into the match with the knowledge that Australia had the better of them in both the T20s and ODIs although the series was played at home. This Australian squad is almost the same that defeated India barring a few players. They would thus believe they have a psychological edge. The match will be a great opportunity for Jasprit Bumrah to redeem himself somewhat after he couldn't quite do the job in the previous series between the teams.

Yuzvendra Chahal proved to be a match-winner against Australia. However, the Aussies would definitely look to hit him out of the attack. The other spinner Kuldeep Yadav has been struggling for rhythm so India might be in two minds over his spot in the team. While Rohit Sharma single-handedly won India the game against South Africa with the bat, Shikhar Dhawan and Virat Kohli have done precious little. They must be raring to make an impression against Australia.