New captain Mushfiqur Rahim smashed the penultimate ball for six to lead Bangladesh to a three-wicket win over West Indies in the one-off Twenty20 match on Tuesday. 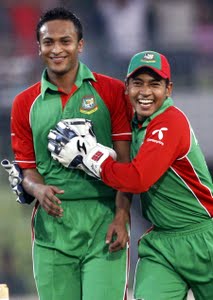 New captain MushfiqurRahim smashed the penultimate ball for six to lead Bangladesh to a three-wicket win over West Indies in the one-off Twenty20 match on Tuesday.

Mushfiqur plundered 41 off 26 balls to help his side past the winning target of 133 with one ball to spare.

Marlon Samuels gave West Indies a chance of victory by top-scoring with 58 in the visitors' total of 132-8 and then taking the wickets of Shakib Al Hasan and Mohammad Ashraful in a spell of 2-14.

That left Bangladesh on 71-5 after 13 overs, but the home side's lower order managed 64 runs from the last seven overs.

West Indies struggled in slow and low conditions at Mirpur, but Marlon Samuels struck an attractive half-century to lift them to 132 for 8 in the only Twenty20. There was little menace from the Bangladesh spinners, but they did enough to cut through West Indies' middle order. Samuels, however, kept counter-punching in an innings that included four sixes and two fours, to give the score some respectability.

Abdul Razzak opened the bowling for Bangladesh, and quickly settled into a loop-and-flight routine that made scoring difficult. Shafiul Islam wasn't as disciplined, and the West Indies openers capitalised on his poor lines and extra pace to kick-start the innings.

Bangladesh captain MushfiqurRahim won the toss and chose to bowl in the one-off Twenty20 match against West Indies on Tuesday.

Rahim is leading the side for the first time since being appointed fulltime captain. He is without vice-captain Mahmudullah, who has been ruled out with illness.