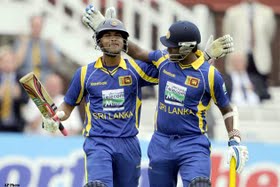 Dinesh Chandimal's unbeaten 105, the 21-year-old's second hundred in just six matches at this level, saw Sri Lanka capitalise on a disciplined bowling display after they held England to a sub-standard 246 for seven.

Chandimal won the match for the World Cup finalists with 10 balls to spare by smashing James Anderson for four.

Sri Lanka might have got there sooner had not Angelo Mathews, whose one not out took 21 balls, been so determined to make sure Chandimal got to a hundred.

Sri Lanka may have lost their rain-affected opener at The Oval by 110 runs but their second victory in three days, following their 69-run success at Headingley, has seen them come from behind to take the lead.

"We are playing good cricket. If we play like this, we can win the next two matches," Dilshan told reporters.

So determined was Mathews to make sure Chandimal, who eventually reached three figures with a six off medium-pacer Tim Bresnan, got to a hundred that he played out a maiden in the 47th over to the visible despair of his captain.

"That disappointed me a little bit but they are youngsters; they are learning every time in the middle," Dilshan said.

"Getting a hundred at Lord's is really special for him (Chandimal). He played like an experienced guy and he finished the game. That's a good sign for Sri Lanka," Dilshan added of the man-of-the-match.

Meanwhile veteran opener Mahela Jayawardene followed up his career-best 144 at Headingley with a superb 79 at Lord's.

"They have a very good bowling attack but Mahela is not giving the bowlers anything. He's hitting every loose ball for runs," said Dilshan.

England captain Alastair Cook, who made a career-best 119 at Lord's, was taken aback by the way Mathews refused easy runs.

"It was different; I've never seen that before," Cook said. "They were perfectly entitled to do it if they want, but it was a bit strange and the cricketing gods may look at that in a bit of disgust."

Cook's second century in 29 ODI matches ultimately could not disguise the fact that no other England batsman made more than Kevin Pietersen's 41.

"It's nice for a bit of confidence to score runs, but never nice in a losing cause. You want to score runs when you win; it's far more satisfying.. We were 40 runs short."

England's seam bowlers rarely looked like taking wickets on a good pitch, with off-spinner Graeme Swann's two for 32 too late to affect the result. However, Cook insisted: "We've played on some pretty flat pitches and what we are thinking is the right way and we just need a little luck to go our way."

Stuart Broad, largely ineffectual during England's 2-1 Test series win against Sri Lanka, went wicketless for the third match in a row. The fast-medium bowler conceded 52 runs in 10 overs at Lord's.

He arrived at Lord's on the back of being fined 50 per cent of his match fee at Headingley. Broad was punished for "unacceptable and offensive remarks" to New Zealand umpire Billy Bowden regarding a rejected lbw decision.

However, Cook said it would not surprise him if Broad - England's Twenty20 captain - came good at the seamer's Trent Bridge home ground in Nottingham, where the fourth match of this series takes place on Wednesday.

"At the moment it's not quite going for Broady, a bit like the Tests, but this is what cricket does," said Cook. "If he gets a five-for next week at his home ground next week it will be worth it. He overstepped the mark (at Headingley); he accepts that."