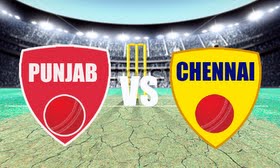 Preview:After a disappointing tournament with the Bangalore last year,Watson has already shown his worth as a player in the two matches that he has played for Chennai. His all-round show was a reminder of the fact that there is no substitute for experience. With scores of four and 14, Raina might not have had the start he wanted, but the fact the his missing the next two games will bring to an end his record of representing Chennai in 158 consecutive matches just goes on to show his value to the team.

Punjab batting worries continued as they collapsed against a Bangalore attack in their previous fixture. Had it not been a 33-run contribution from their captain Ashwin, they would have struggled to get anywhere close to a decent score. Yuvraj was castled by the pace of Umesh Yadav and has reached an age where every failure will be magnified more than a success. Mayank Agarwal has also failed to replicate his domestic season form and dismal IPL record is yet to get any better.

Jadeja might have hit the winning runs for Chennai in the last game but has only bowled three overs in two games he has played so far. It might make sense for them to bring in a specialist bowler than to not utilize what Jadeja has on offer.

Punjab could consider bringing in Manoj Tiwary to add some solidity to the middle order and have Finch open the batting alongside KL Rahul. Mohit Sharma’s expensive performance with the ball could also throw Barinder Sran into the mix of things.

Aaron Finch made his debut for Punjab in the game against Bangalore the other night. During the process, he became the first player to represent seven teams in the IPL.

In both their matches so far, Chennai have successfully chased down 51 runs that were required of their last 24 balls.