Hosts New Zealand snapped their losing streak against India with a comprehensive four-wicket victory in the first ODI at Hamilton, chasing down a mammoth 348 for victory.

Hosts New Zealand snapped their losing streak against India with a comprehensive four-wicket victory in the first ODI at Hamilton, chasing down a mammoth 348 for victory. Under pressure having lost the T20Is 5-0, the Kiwi chase was led by the experienced Ross Taylor, who remained unbeaten on 109 from only 84 balls.

Taylor and stand-up captain Tom Latham (69 from 48) featured in a whirlwind stand of 138 for the fourth wicket to put the Kiwis in command. The duo was extremely severe on Shardul Thakur (1 for 80) and Kuldeep Yadav (2 for 84) as they made easy meat of India’s tough target. Earlier, opener Henry Nicholls also contributed a crucial 78 before being brilliant run out by Virat Kohli. Nicholls and Martin Guptill (32) got the Kiwis off to a wonderful start in the chase. 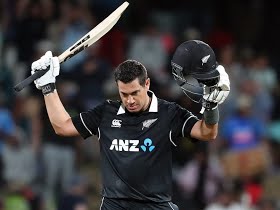 The day does belong to Taylor, who could do no wrong. Walking in with the score reading 109 for 2, and New Zealand having a mountain to climb, the 35-year-old was in his elements right from the word go. He smashed 10 fours and four sixes in his unbeaten knock. And, although there was another mini-hiccup towards the end, with New Zealand losing a few quick wickets, Taylor stayed till the end to take the hosts past the winning line.

Earlier in the day, Shreyas Iyer cracked his maiden ODI century, making 103 from 107 as India posted what seemed like an imposing 347 for 4. KL Rahul continued his brilliant form with an unbeaten 88 from 64 while skipper Kohli departed after contributing 51. Kedar Jadhav also chipped in with a fine cameo of 26 not out from 15 balls.

The match saw both Indian openers making their ODI debut -- Prithvi Shaw and Mayank Agarwal. The pair added 50 off 48 balls but then fell in quick succession. Shaw was caught behind off Colin de Grandhomme for while Agarwal perished at a point to Tim Southee having made 32. India recovered very well from the losses, but Taylor proved too good for the visitors on the day.

Speaking after the game, the man of the man Taylor admitted it was nice to get across the line. “Restricting them under 350 gave us a chance. We were fortunate with the left-right hand combination and we were able to target the short boundary. Tom (Latham) came in and took the pressure off me. I told the boys Hamilton is like sleeping in your own bed, Southee said why don't you take it around then. It's been a happy hunting ground for me. It was nice to be there at the end after I got out thrice towards the end in the T20 series.”

Indian skipper Kohli termed New Zealand’s chase outstanding. “We thought 348 was good enough, especially after the start we got with the ball. I think Tom's innings took the game away from us. Ross and Tom were unstoppable in the middle overs. We were decent in the field, we dropped one chance. We need to improve though. We can't think about that one chance. To bat with a positive frame of mind for about 25 overs after that chance is not a small thing at all. I got to say that the opposition played better than us and deserved to win today,” Kohli conceded.